Two weeks after Andres Gutierrez inexplicably came in 11 pounds overweight for an ESPN+ main event versus Oscar Valdez, there were no issues at the scale Friday afternoon for Top Rank’s card Saturday night in New York. 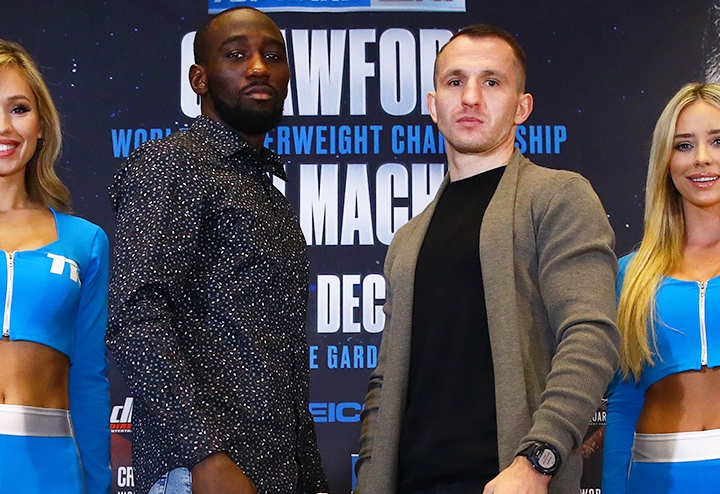 Crawford, a three-division champion from Omaha, Nebraska, will make the third defense of the WBO welterweight title he won by stopping Australia’s Jeff Horn in June 2018 at MGM Grand Garden Arena in Las Vegas. Crawford consistently is listed as at least a 16-1 favorite to beat Kavaliauskas.

Handicappers have installed Lopez as slightly more than a 2-1 favorite to win the IBF 135-pound crown from Commey, the toughest opponent of Lopez’s three-year career. The Commey-Lopez winner likely will face Vasiliy Lomachenko in his following fight.

Ukraine’s Lomachenko (14-1, 10 KOs) owns the WBA and WBO lightweight titles. He also is the WBC’s franchise champion in the lightweight division.

Northern Ireland’s Conlan (12-0, 7 KOs) officially weighed 125½ pounds for his grudge match with Nikitin (3-0). Russia’s Nikitin weighed in exactly at the featherweight limit of 126 pounds for the first 10-rounder of his pro career.

Conlan, 28, will attempt to avenge his infamous Olympic loss to Nikitin three years ago. Belfast’s Conlan clearly out-pointed Nikitin, 29, in their bantamweight quarterfinal at the 2016 Summer Olympics in Rio de Janeiro.

Conlan responded to losing on points by sticking up his middle finger at the judges before leaving the ring.

Was the weigh in on the streaming app? Didn't see any of the boxing media outlets post it on Youtube.

[QUOTE=factsarenice;20252772]He just fought Charlo and now he's fighting Crawford? Dam, White guys all look the same....just sayn.[/QUOTE] An interesting comment on race and visual acuity. Caucasians struggle to tell blacks apart as well, and neither blacks nor whites can confidently…

Hopefully a showcase fight for TC. Yes showcase fights scare away PBC girls, but it also helps build momentum...which is how GGG got to fight Canelo