Crawford: I'm Hoping The Manny Pacquiao Fight is Next!

WBO welterweight champion Terence Crawford is crossing his fingers that Top Rank can finalize a deal to get him a fall unification with Manny Pacquiao, who holds the WBA's world title.

In several recent interview, Top Rank's CEO Bob Arum mentioned Pacquiao as a potential opponent for Crawford in the second half of the year.

“My next fight should be Pacquiao, we’re in talks with Team Pacquiao and I’ve been hoping that fight can get made, but anything after that I really can’t say because I’m only looking forward to the next fight, so if we can get that fight secure and signed then hopefully that can be our next fight,” Crawford told The Last Stand Podcast with Brian Custer. 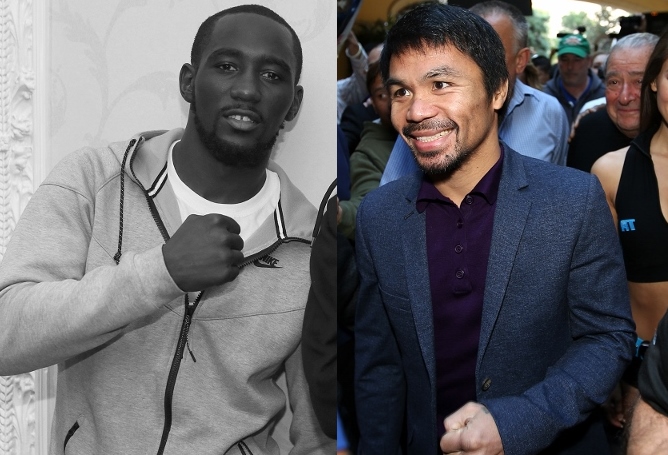 Pacquiao is under the Premier Boxing Champions [PBC] umbrella - where there are numerous boxers that he can face at welterweight.

The Filipino superstar has been out of the ring since July 2019, when he won a twelve round decision over Keith Thurman to capture the WBA title.

If not Pacquiao, then Crawford is willing to fight any of the top names at 147-pounds.

“Sky the limit for me right now, I’m looking for all the big opportunities and all the champions.  I’m gunning for all of them,” Crawford said.

But most of the top names at welterweight are with PBC - including Pacquiao, Danny Garcia, Errol Spence, Keith Thurman, Yordenis Ugas, Shawn Porter and several others..

“Once it came to a point where it was some of their big fighters, they didn’t want to put them in the ring with me because they didn’t want to have Top Rank have the edge over their head where one of their fighters took out one of their top welterweights fighters.  So in a sense they (PBC) just fight each other, lets just take each other out, and see what he does in the meantime and we’ll go from there,” Crawford said.

[QUOTE=Truth Serum;20623550]Bud himself said that he wouldn't fight Manny at 147 even though he outweighed Manny at the time. Manny had no interest in going to 140 and Bud wanted no part of Manny at 147.[/QUOTE] While Bud was at…

[QUOTE=Truth Serum;20623550]Bud himself said that he wouldn't fight Manny at 147 even though he outweighed Manny at the time. Manny had no interest in going to 140 and Bud wanted no part of Manny at 147.[/QUOTE] When was that? I…

Pac should retire. He will lose to Bud, perhaps by KO. If it was prime Pac thats another thing, obviously. But he lost the second half of the fight to Thurman because he faded really hard. Pac got really really…

[QUOTE=IronDanHamza;20623166]He said Pacquaio never wanted it. He didn’t make him an offer because he didn’t want the fight :lol1: He might want it now. I very much doubt it but even if he wants it now it won’t change the…