Crawford: I'm Better Than Anyone Amir Khan Has Ever Faced

Terence Crawford's WBO welterweight title defence against Amir Khan has been confirmed, with the duo set to face off in the United States on April 20.

The date for the contest was officially announced on Tuesday as the two boxers held a news conference in London.

A three-division world champion unbeaten in 34 bouts, Crawford is rated among the best pound-for-pound fighters in the world. 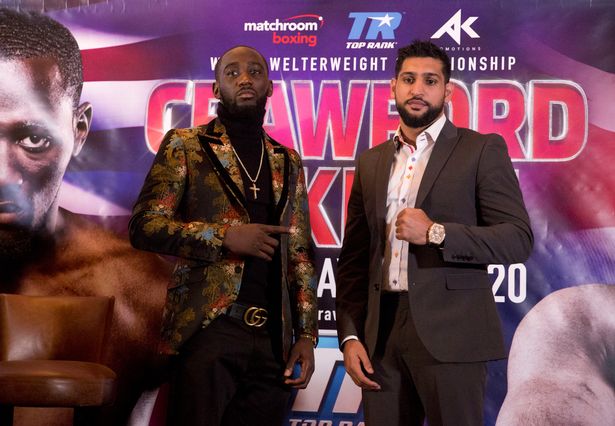 Yet Khan (33-4), who recorded wins over Phil Lo Greco and Samuel Vargas in 2018 after a near two-year hiatus, insists he can spring an upset against the American.

"Crawford is beatable. I want that WBO world title. It's going to be one hell of a fight," said Khan, who went on to explain why he will not yet face fellow Briton Kell Brook - a man he has called out on numerous occasions.

"The decision as to fighting Crawford or Brook has been one of the most difficult decisions of my career to date but I could not turn down the opportunity to fight for the WBO world title. That is not to say that the Brook fight won't happen."

After knocking out Jeff Horn to claim the WBO strap last June, Crawford dominated Jose Benavidez in a successful first defence in October and will undoubtedly start as a heavy favourite against Khan.

"I'll be looking to go out there to seek and destroy," said Crawford. "I'm excited about this fight because I believe it can push my career to another level."

They are expected to face off in either New York or Las Vegas, but details have yet to be confirmed.

“Amir Khan’s still dangerous, still fast, still got the experience, been a welterweight longer than me. But we’re not taking any shortcuts in this fight. My way to be able to adjust in the blink of an eye – fighting so many styles in my life; there’s never been a fighter I couldn’t figure out.

“(Past Khan victim) Zab Judah was past his prime (when they fought); right now I’m better than anyone he’s faced before.”

Asked of Khan reuniting with Hunter, Crawford’s long-term trainer Brian McIntyre said: “I really don’t see the difference if he goes back to Virgil, or gets his dad. We know what Terence is going to do and I see it like that.”

[QUOTE=BlackSoul;19437205]Crawford has better defense, faster footwork is better at shifting EVERYTHANG amir khan does Crawford does it better except speed. crawfod would not get ko'd by canelo at 154 now 160 crawford would have put on too much weight and…

[QUOTE=REYESdelBOXEO;19435921]CANELO would out box Crawford & lay him out flat , giving Bo-Mac a heart attack![/QUOTE] Canelo is 20lbs heavier!

[QUOTE=TheUptownKid;19436691]True, he has a chance and he was winning on the cards when he got starched by Canelo. But he doesn’t have that championship mettle that is required at the elite level. He buckles under pressure and bud knows how…

[QUOTE=HarvardBlue;19436374]Dude, you get so emotional about Canelo it's not even funny anymore.[/QUOTE] I brought up Maidana as well. There are plenty of boxers with the right promotor, trainer, experience would, could, should be much, much better. Your dumb ass casual…