Crawford-Collazo Deal Nearly Done; Could Be March 23 At MSG

It looks like Terence Crawford will face a southpaw represented by Al Haymon in his next fight.

No, not that one.

BoxingScene.com has learned that Crawford likely will make the second defense of his WBO welterweight title against Luis Collazo. Negotiations have progressed to the point that a deal could be finalized within the next week, once this holiday weekend concludes.

The date and site aren’t settled, but Crawford-Collazo could take place March 23 at Madison Square Garden in New York. ESPN will televise their 12-round, 147-pound title fight. 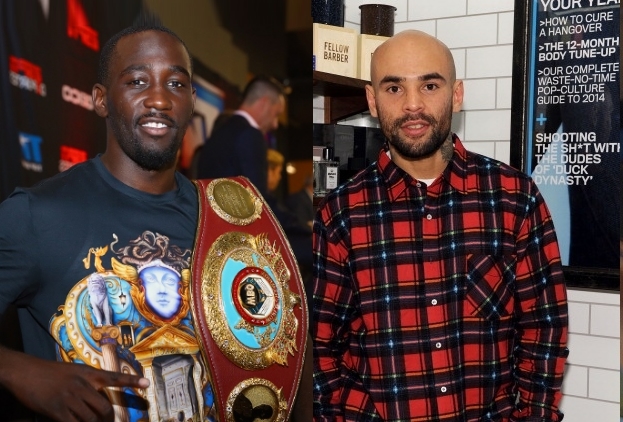 Promoter Bob Arum confirmed following Egidijus Kavaliauskas’ victory last Friday night that he would explore matching the unbeaten Lithuanian contender against Crawford next. Crawford came to Oklahoma City to take an up-close look at Kavaliauskas (21-0, 17 KOs), who knocked out Nicaragua’s Roberto Arriaza (17-1, 14 KOs) in the third round of their scheduled 10-round WBO welterweight elimination match on the Maurice Hooker-Alex Saucedo undercard at Chesapeake Energy Arena.

During and after that card November 16, Crawford and Errol Spence Jr. engaged in largely light-hearted, respectful exchanges regarding their much-discussed showdown.

A welterweight title unification bout between Crawford (34-0, 25 KOs) and Spence (24-0, 21 KOs) would be one of the biggest fights in boxing. Fans begrudgingly have accepted that Crawford-Spence won’t take place any time soon due to their network and promotional/managerial alignments, as well as Spence’s preference to face WBC champ Shawn Porter (29-2-1, 17 KOs) and WBA champ Keith Thurman (28-0, 22 KOs, 1 NC) before boxing Crawford.

Crawford would be heavily favored to beat Kavaliauskas, too, but that fight seemingly made more business sense than Crawford-Collazo.

Arum’s company, Top Rank Inc., promotes Crawford, 31, and Kavaliauskas, 30, which would’ve made it easy to put together. Arum apparently settled on a secondary plan for Crawford’s first of three fights in 2019.

Collazo is a former WBA world welterweight champion, but he has suffered from inactivity during the twilight of his career and will be a big underdog against Crawford. The Brooklyn native has fought just twice since Thurman stopped him after the seventh round in July 2015.

Collazo underwent surgery to repair a torn left biceps muscle and endured an extensive rehabilitation program between his victories over Vasquez and Perrella.

Before Crawford even turned pro, Collazo held the WBA world welterweight title for 13 months. He lost that title to Ricky Hatton, who beat Collazo by unanimous decision in their May 2006 bout in Boston.

Crawford made the first defense of the WBO 147-pound championship October 13. The three-division champion stopped Phoenix’s Jose Benavidez Jr. (27-1, 18 KOs) in the 12th round of their fight at CHI Health Center in Omaha, Nebraska, Crawford’s hometown.

Crawford’s victory versus Benavidez marked the beginning of his contract extension with Top Rank, which was announced early in September.

Spence, meanwhile, is headed toward a March 16 fight against four-division champion Mikey Garcia. The 28-year-old Spence, of DeSoto, Texas, will defend his IBF welterweight crown against Garcia, who’ll move up from lightweight (135 pounds) to the 147-pound division for their FOX Pay-Per-View main event at the Dallas Cowboys’ AT&T Stadium in Arlington, Texas.

Well...we've all been waiting for this exciting match-up with bated breath. PPV anyone?

[QUOTE=killakali;19298202]Wrong. Stop trying to be an insider. You are just a fan like me. Oscar said himself they never spoke to Haymon and just spoke to his attorney. He said the same thing for the Khan fight. Khan himself said…

[QUOTE=RJJ-94-02=GOAT;19297834]“Zero negotiations” for Canelo-Chavez. WRONG AGAIN retatrd😭😭😭 [url]www.espn.co.uk/boxing/story/_/id/19346991/canelo-alvarez-julio-cesar-chavez-jr-held-secret-weigh-fight[/url] 5th paragraph in... “GBP and Haymon finalised the deal” You’re just embarrassing yourself now🤣🤣🤣[/QUOTE]Wrong. Stop trying to be an insider. You are just a fan like me. Oscar said himself they never…

[QUOTE=killakali;19297005]wrong puto. Like I said Khan's team negotiated the whole Canelo fight then at the end they went to Haymon and showed the deal they had and Haymon took his cut. He had zero negotiations just like he didn't for…

[QUOTE=killakali;19297005]wrong puto. Like I said Khan's team negotiated the whole Canelo fight then at the end they went to Haymon and showed the deal they had and Haymon took his cut. He had zero negotiations just like he didn't for…