More viewers tuned in to watch ESPN’s boxing broadcast Saturday night than for any of the network’s telecasts of the sport since Manny Pacquiao-Jeff Horn.

According to Nielsen Media Research ratings released Tuesday, an average of 2,245,000 viewers watched the nearly two-hour show that featured Terence Crawford in the main event. The undefeated Crawford stopped Jose Benavidez Jr. in the 12th round of their welterweight title fight at CHI Health Center in Omaha, Nebraska.

The ratings for the Crawford-Benavidez broadcast were by far the highest of any boxing telecast in 2018. ESPN has an advantage over Showtime and HBO, however, in that the basic cable network is available in approximately 86 million homes, many more than HBO (32 million) and Showtime (24 million), both premium cable channels. 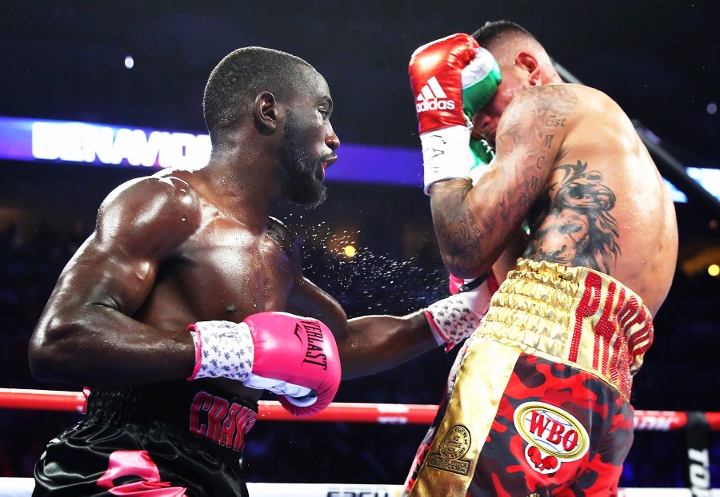 Regardless, it was ESPN’s most-watched boxing show since Horn upset Pacquiao in July 2017 in Brisbane, Australia, Horn’s hometown, to win the WBO welterweight title. That telecast was watched by an average of 2.8 million viewers and peaked at 4.4 million.

The Pacquiao-Horn telecast marked the start of an exclusive content partnership between ESPN and promoter Bob Arum’s Top Rank Inc., which since has been extended to seven years.

Undefeated featherweight prospect Shakur Stevenson stopped Viorel Simion in the first round of the opening bout, a scheduled 10-rounder. Stevenson (9-0, 5 KOs), a 2016 Olympic silver medalist from Newark, New Jersey, dropped Romania’s Simion (21-3, 9 KOs) three times before their bout was stopped at the very end of the first round.

[QUOTE=teamindividual;19201858]jealous of someone who watched a hughie fury fight? Lol![/QUOTE] Nobody watch that bum lol.

[QUOTE=Boksfan;19198697]You very jealous because they like real sport and not some fake football :lol1:[/QUOTE] jealous of someone who watched a hughie fury fight? Lol!

[QUOTE=CocoonOfHorror;19198657]First, Crawford-Postol PPV was a massive flop - 50-60k buys. Arum actually came out and said that he lost money. Second, just because a boxer's biggest fight to date was on PPV doesn't mean that every fight will be. Just…