Crawford Beats Down, Stops Horn in Nine For WBO Title

One of the best boxers in the sport spent eight-plus rounds Saturday night proving that to the rugged fighter from Australia. Crawford (33-0, 24 KOs) battered the previously unbeaten Horn (18-1-1, 12 KOs) throughout their main event of an eight-bout card at MGM Grand Garden Arena and stopped him in the ninth round.

Crawford, who was nearly a 10-1 favorite over Horn, dropped Horn with an overhand left late in the ninth round. The courageous Horn got up and continued trying, but referee Robert Byrd mercifully stepped in and stopped him from taking more punishment 2:33 into the ninth round.

The dominant Crawford’s win ended Horn’s unforeseen run to stardom in his homeland after upsetting Pacquiao last summer. Crawford, who fought almost exclusively from a southpaw stance, also proved he has carried his power up to 147 pounds in his welterweight debut. 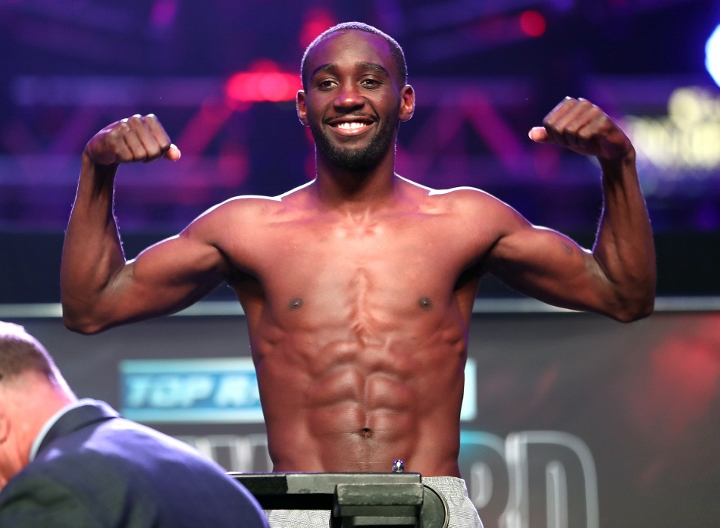 The 30-year-old Crawford previously owned the WBO lightweight title and the IBF, IBO, WBA, WBC and WBO 140-pound championships. He gave up those five super lightweight/junior welterweight titles to move up to the welterweight division.

“Like I told y’all before, I’m strong,” Crawford told ESPN’s Bernardo Osuna following his win. “You know, y’all didn’t believe me and I was way stronger than him. You know, y’all kept telling me how strong he was, but y’all didn’t give me enough credit. So I had to go in there and show y’all.”

Crawford believes he showed the other welterweight champions, namely IBF champ Errol Spence Jr. and WBA champ Keith Thurman, “We here. Like I said, my power carried up. You know, my physicality. [I] got stronger. We here.”

The newly crowned champion overcame a supposed size and strength disadvantage by manhandling Horn at times and refusing to allow Horn’s physicality to affect him. When Crawford wasn’t out-muscling Horn, he hammered him with an array of power punches to the head and body.

“He was strong,” Horn said. “He was fine. He didn’t seem like a smaller guy, that’s for sure. We weighed the same thing.”

Crawford was ahead by the same score, 80-72, on all three cards entering what emerged as the final round.

Crawford took target practice on Horn throughout the ninth round and finally forced Horn to the canvas after landing an overhand left near a neutral corner. Both of Horn’s gloves touched the canvas, which counted as a knockdown with 53 seconds to go in the ninth.

Byrd allowed the action to continue and Crawford continued his vicious assault until Byrd jumped in to save Horn.

“I was just slightly off balance, on my feet,” Horn said of the knockdown. “I wish I could keep going till the end, but the ref said to me, ‘Stop fighting.’ … I’m sure, Jo, my wife, was happy anyway.”

Crawford landed a right-left combination to Horn’s body late in the eighth round that enabled him to tee off on Horn’s head. Crawford continued his onslaught with three left hooks and a right hook that staggered Horn.

Crawford nearly dropped Horn by blasting him with a straight left hand just before the eighth round ended. Horn lost his balance, but didn’t go down just before the bell rang.

Crawford landed a left uppercut to Horn’s body just before the midway mark of the eighth round.

Crawford cracked Horn with a straight left hand around the one-minute mark of the seventh round.

Crawford showed off his versatility during the sixth round, when he hit Horn with a straight left hand, a left uppercut and a left to the body during a brutalizing 20-second stretch. Toward the end of the sixth, Crawford buzzed Horn again by landing a right hook.

Crawford connected with a hard left to the body early in the fifth round. Horn temporarily trapped Crawford against the ropes just before the midway mark of the fifth round, but Crawford quickly worked out of it.

Byrd warned Horn for rough tactics later in the fifth. Once the action resumed, Crawford hammered Horn with a vicious combination to his head that staggered him.

Late in the fourth round, Crawford took a step back and hit Horn with a right hook.

When Horn tried to get physical with Crawford early in the third round, Crawford shoved Horn off of him, into the ropes. Then Crawford stepped back, drilled Horn with a quick right hook and added multiple body shots.

Crawford landed a hard jab with a little under a minute remaining in the second round. He followed it up with a right hook.

Crawford also landed a short left uppercut just before the bell sounded to end the second round.

Fighting out of a southpaw stance a few seconds after the opening bell, Crawford connected with a left hand about 40 seconds into their fight. Crawford hit Horn with another straight left hand with just under 50 seconds to go in the first round.

Crawford, who was the mandatory challenger for Horn’s title, fought for the first time Saturday night since he knocked out Namibia’s Julius Indongo (22-2, 11 KOs) with a body shot in the third round of their super lightweight title unification fight August 19 at Pinnacle Bank Arena in Lincoln, Nebraska.

Crawford and Horn were supposed to fight April 14 at Mandalay Bay Events Center. Crawford suffered a hand injury in sparring, though, and their title fight was postponed until Saturday night and moved to nearby MGM Grand Garden Arena.

[QUOTE=R_Walken;18860388]No point debating with Spoon Literally 99% of his post are PAC related and defending his honour like he’s PACs wife ( I don’t even think she would spend all her time defending her man honestly ) Suprised he didn’t…

[QUOTE=Noelanthony;18858943]I Watched that WWE match.... Lololololol[/QUOTE] No point debating with Spoon Literally 99% of his post are PAC related and defending his honour like he’s PACs wife ( I don’t even think she would spend all her time defending her…

[QUOTE=Noelanthony;18857004]I thought that was it , there was no way you could possibly respond. I got rid of him and finished his infatuation with Pacquiao .but lo and behold you will not die. You are a warrior I have battered…

[QUOTE=Verus;18855559]Excluding the Vatican, there are 195 countries in the world, meaning 98 countries is "most." Not that it is relevant, but do you think Australia would not be unable to repel an invasion at least one of those 98 countries.…