SHOWTIME has acquired the television rights to CRADLE OF CHAMPIONS, a documentary film that takes viewers through the New York Golden Gloves tournament, one of the most prestigious amateur boxing tournaments in the country. Written and directed by journalist Bartle Bull, the film will premiere Friday, September 21 at 8 p.m. ET/PT on SHOWTIME.

CRADLE OF CHAMPIONS chronicles three inspiring fighters—James Wilkins, Nisa Rodriguez, and Titus Williams—as they navigate the 10-week tournament and fight their way among 500 boxers from the five boroughs, all vying for the coveted title of Golden Gloves champion. Through the three intertwined yet unique narratives, the film explores the pressures and sacrifices on the arduous journey toward boxing greatness.

Shot in a cinema verité-style with no voice-over narration, the character-driven narrative examines what it means to “fight for your life,” not only for the boxers, but also for their coaches, mentors, teammates and loved ones. CRADLE OF CHAMPIONS includes genuine characters and intimate revelations set against the gritty urban landscape of New York City to create a powerful and layered account of the 2015 tournament. 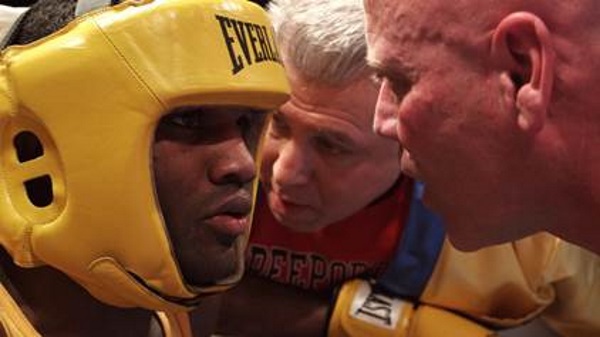 The film follows Williams and Wilkins as they battle through opposite sides of the 132-pound bracket. Williams is the tournament favorite on the brink of professional success. He is mentored by coach Joe Higgins, a retired New York City firefighter suffering from illnesses sustained during rescue and recovery efforts at the World Trade Center in the aftermath of the September 11, 2001 terrorist attacks. Wilkins, a Staten Island native who channels his propensity for fighting into an amateur career, aims to beat Williams and establish himself as a prospect to watch as he turns to the professional ranks. Meanwhile, single mother and teacher Rodriquez—a five-time Golden Glove champion and self-proclaimed, “fighting pride of the South Bronx”—attempts to cement her legacy as she sets her sights on the 2016 Olympic Trials.

CRADLE OF CHAMPIONS is Bull’s first endeavor into documentary filmmaking. A New York based author and journalist by trade who specializes in foreign affairs and the Middle East, Bull has appeared on NPR, Fox News, BBC, and other news outlets, and his work has been featured in New York Times, Washington Post, and Wall Street Journal.

CRADLE OF CHAMPIONS is executive produced by Donald Rosenfeld (Tree of Life, Jodorowsky's Dune, Remains of the Day) and written and directed by Bull, in association with cinematographer Tom Hurwitz (The Queen of Versailles) and editor Michael Levine (Restrepo). The film was an official selection at the 2017 American Documentary Film Festival, the 2017 Santa Barbara International Film Festival and Doc NYC 2017. CRADLE OF CHAMPIONS was named Best Feature at the 2017 Big Sky Documentary Film Festival.