Two of the most iconic combat sports athletes could be on a collision course to fight one another.

UFC star Conor McGregor took to social media on Friday and stated that the next time he’s engaged in a sanctioned fight, it will be in a boxing ring, and not an MMA cage.

“I’m boxing Manny Pacquiao next in the Middle East,” McGregor said as part of a series of tweets. “It will be a true honour to have faced two of the greatest boxers of the modern era, afraid of a fight.”

McGregor's manager and Paradigm Sports head Audie Attar told ESPN on Friday that the Irishman is in "serious talks" to fight the all-time Filipino great, "but the bout isn't a done deal yet." 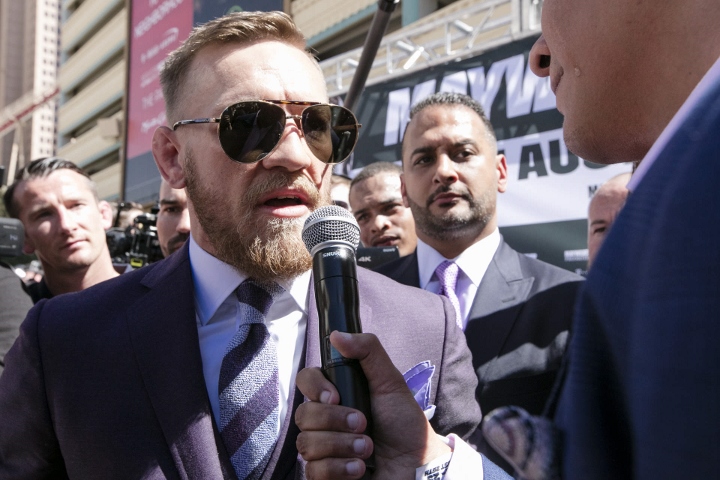 McGregor and Pacquiao are targeting a late December, or January 2021 date, and the Middle East is one of a few locations considered for the crossover fight.

Attar further explained that the final weight has not been determined for the bout, and that the UFC was on board with the idea of McGregor boxing, even though the MMA star proclaimed his retirement this year. The plan is for McGregor to continue his UFC career in 2021.

McGregor also went on a tweetstorm posting screenshots of pre-Covid 19, pre-retirement Instagram conversations he had with UFC president Dana White as he attempted to map out the rest of his year. He followed the statements by posting footage on Instagram Stories of himself shadow boxing in a ring.

“I was pushing hard for the season,” McGregor continued on Twitter. “Multiple [UFC] opponents, multiple dates offered throughout. All to take place back to back. Then when covid hit and the talk was that I would have to wait for crowds again, I walked away from the situation. I was waiting long enough at that stage … Anyway all water under the bridge who gives a f---.”

McGregor (22-4 MMA; 20 stoppages; 0-1 boxing) and the eight-division champion Pacquiao (62-7-2, 39 KOs) have been linked to a potential fight ever since McGregor scored a 40-second KO of Donald Cerrone in January. It was McGregor’s first fight since losing to Khabib Nurmagomedov in October 2018.

During McGregor-Cerrone fight week, Manny Pacquiao Promotions head and right-hand man Sean Gibbons shared a poster on social media of the two fighters facing off for a fight at Allegiant Stadium, the Raiders’ new arena in Las Vegas.

Less than a month later, Pacquiao signed a pact with Paradigm Sports, the same management group that handles McGregor.

Previous to the Nurmagomedov loss, McGregor made his boxing debut against Floyd Mayweather Jr. in a tenth-round TKO loss in August 2017. “The Money Fight” generated 4.3 million pay per view buys, the second most in boxing history.

McGregor weighed 170 pounds in his fight against Cerrone. For Mayweather Jr., he tipped the scales at 153 pounds. The 41-year-old Pacquiao has exclusively fought as a welterweight since 2009 and has consistently come in less than the 147-pound limit.

Pacquiao had a throwback year in 2019, beating Adrien Broner and Keith Thurman. He has been linked to every welterweight from Errol Spence Jr., Mikey Garcia, Terrence Crawford, Danny Garcia and Shawn Porter since then, but it appears Pacquiao has an appetite for a more star-studded opponent to rake in one last massive payday before potentially retiring.

During a press conference ahead of his fight against Cerrone, BoxingScene.com asked the 32-year-old McGregor what his plans were in boxing moving forward.

“For me, an aspiration of mine is to win a boxing world title. That would be a phenomenal feather in the cap and something I look to achieve and will achieve in the future," McGregor said at the time. "What a fight that would be against Manny — a small powerful southpaw. We would have to figure out the weight and those types of things, but it’s something that interests me, no doubt.”

Manny’s camp confirmed, fight is happening in January 2021. The fight Manny was waiting for. Good for him.

[QUOTE=blowblow;20779938]name name/s pls.. comeback to me if you can support your claims. typical people just to say something. stop doing that it doesn't make you cool.[/QUOTE] ———— Alright. I can do that. Can you justify the opponents Manny fought (Brandon…

[QUOTE=blowblow;20778743]who did he miss? drop the name/s pls. i will wait[/QUOTE] ——— “Drop the names, I’ll wait” - a juvenile response that we’ve seen one too many times on this platform. Just look at the top ten ranking of WW…