Commey Sees Beltran as 'Big Opportunity' To Get His Name Out

Boxing is taken seriously in Bukom. So when Isaac Dogboe lost his WBO junior featherweight title to Emanuel Navarrete last December, the heat was on for Richard Commey to get the job done in his own title fight.

For Bukom. For Accra. For Ghana.

That’s a lot of pressure for anyone, but Commey took it quite differently as he prepared for his second world title shot in February, this one against Isa Chaniev.

“I’m there to give my all for my nation,” he said. “As long as you’re doing it not only for yourself, but for everyone, I feel the strength. I know the nation is behind me and everyone wants me to be a world champion. So I felt really great. I felt the energy. So going in there I knew the country’s behind me, so I gotta put my all in there.”

He did, and it wasn’t even close. Three times Chaniev hit the deck before the fight was stopped 39 seconds into the second round. Richard Commey was the IBF lightweight champion of the world. And Bukom erupted.

As Commey made his way back home, his smile was as big as those of his fans as they mobbed him everywhere he went. The 32-year-old is the latest in a line of champions from the Bukom neighborhood – Azumah Nelson, Ike Quartey, David Kotey Joshua Clottey, Dogboe and now Commey, who knew what awaited him as a conquering hero.

“I know my people, and even when I fought with (Robert) Easter, what happened was amazing,” said Commey. “So I definitely knew going home was going to be massive and I was expecting something like that. My people will always turn out to do the same thing what I expected, so it was a great feeling.” 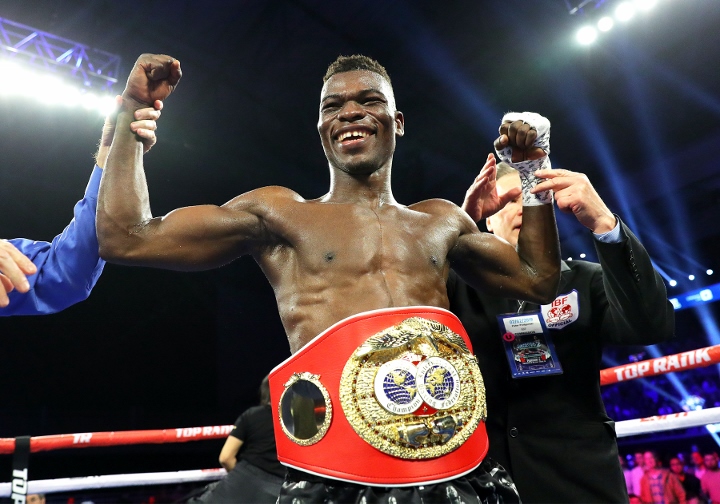 That loyalty was appreciated by the new champion, who many believed should have been celebrating after the 2016 title fight with Easter, one lost by Commey via split decision. It wasn’t the last heartbreak, as he would lose a second consecutive split decision less than three months later to Denis Shafikov.

Since then, Commey has won four straight, three by knockout, as he prepares for his first title defense against Ray Beltran on Friday. Has that been a response to the judges of the Easter and Shafikov fights? Not so, says the classy Commey.

“Honestly speaking, I’ve never gone into any fight trying to knock whoever I fought out. I just train hard and go in there and do what I have to do. But if I get a chance, I always try to take it as much as I can. I respect every fighter I fought – they come and prepare themselves before they get in there – and I pray that God will give me the chance to see whatever my opponent has and take advantage and capitalize on it. It’s all scheduled for 12 rounds, so I train myself and prepare to go the distance.”

But as the man recently nominated for the Man of the Year award in sports by EMY Africa knows, a knockout of the notoriously tough Beltran, a former world champ who has not been stopped in nearly 11 years, is a big deal and the kind of win that will elevate his international profile even more.

“It is a big opportunity for me to put my name out there,” Commey said. “Beltran is a tough guy and he’s been around. So for me to have a chance to fight with this guy will let people see the real me and obviously they’ll see that I’m ready to face whatever comes my way. He’s a big guy and he’s been around for a long time and he’s fought big fighters like (Terence) Crawford and Ricky Burns. He’s fought so many good fighters out there, so it’s always good to share a ring with someone like him and then that will also put your name out there.”

Commey has already conquered Ghana. Now it’s time for the rest of the world, and if a win over Beltran leads to a fight with Teofimo Lopez and then Vasyl Lomachenko, he may just do it. But everything always leads back to Bukom, and I ask him what would happen if he topples Lomachenko.

“Oh man,” he laughs. “I think if it ever happens, if they do an election I’m gonna be the president.”

I've seen Commey fight for some years now. He's either unknown or underrated! He's tough as hell and always comes to fight. I'm a fan. I kinda feel bad for Beltran, I think he's either going to get ko'd cold…