“Cassius” Clay Collard continues the unlikeliest of Prospect of the Year campaigns.

The former mixed martial artist continues to thrive in the ring, picking up his fourth win of 2020 after stopping Lorawnt T. “Smash” Nelson in two rounds.

Collard scored three knockdowns in total before prompting referee Celestino Ruiz to halt the contest at 1:57 of round two Tuesday evening at MGM Grand Conference Center in Las Vegas.

“I think I fought him like a boxer more,” Collard (8-2-3, 3KOs) told ESPN’s Bernardo Osuna after the bout. “Just boxing, keeping him at the end of my punches.” 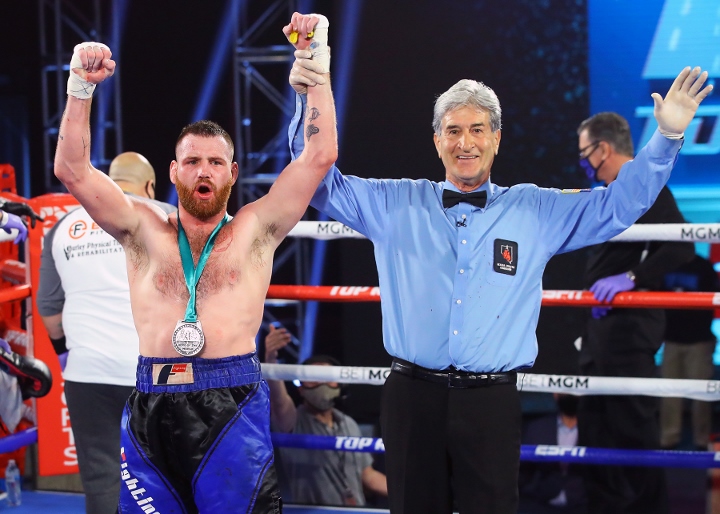 Collard dominated the brief affair, landing 61 of 137 punches at a 45% connect rate according to Compubox statistics. Nelson was just 12 of 88 for a 14% clip.

Collard entered the fight riding a wave of momentum, having scored upset wins over three straight unbeaten opponents. His clash with Nelson (5-4, 4KOs) was the first where he came in as the betting favorite, as high as -800 in several sportsbooks. The fighting pride of Cache Valley, Utah by way of Burley, Idaho justified the odds, going right to work in an aggressive opening round. Nelson felt the full brunt of Collard’s power, hitting the deck after getting clipped with a right hand midway through the opening round. Nelson rose to his feet before the referee jumped in to rule it a knockdown, as Collard landed a right hand on his opponent’s shoulder which drew a warning.

Nelson was already busted up barely four minutes into the contest. The South African product was cut under the right eye, nose bloodied and once again sent to the canvas. A right hand once again did the trick, as Collard was in pure stalker mode. Nelson beat the count but found himself down on the canvas moments later courtesy of a left hook.

Collard remained poised, steadily marching forward and going on the attack. Nelson was warned to show something, but in struggling to do so was rescued from taking additional punishment.

“The key is staying consistent,” insisted Collard, who wins just four weeks after upsetting previously unbeaten David Kaminsky in this very venue. “I listen to my coach every day, and he yells at me every day.

Collard has done just that, becoming the summer story nobody expected in the process.

The bout served as the chief support to the first-ever female main event on ESPN, as Mikaela Mayer (12-0, 5KOs) faces Helen Joseph (17-4-2, 10KOs) in a 10-round junior lightweight contest.

It's criminal that Golden Boy made him an opponent for that Uzbek who was way bigger. They do not care about fighters and do not know how to promote any (Canelo and Ryan Garcia don't count since they did it…

Dude has definitely been making the best out of a bad situation. Got to give it to him. Going out and making statements each fight. Other guys should take notice.

The Blue Collar went to work as usual and started out fast to beat down the unfortunate soul who agreed to fight him! I’m very interested in seeing Collard vs Joey Spencer! Come on Bob make an offer and put…

Maybe Clay Collard is using this summer to get his name on the map. This kid is improving each fight. I am glad with his fights. :boxing: