Barely a year after Vasiliy Lomachenko and Kosei Tanaka became three-division titlist quicker than anyone else in boxing history, Claressa Shields is ready to raise the ante.

The unbeaten, undisputed middleweight champion is ready to add a third divisional crown to her arsenal as she vies for a vacant 154-pound title. Her mad dash towards creating more boxing history will come versus former welterweight titlist Ivana Habazin on August 17 in Shields’ hometown of Flint, Mich.

“It’s hard to even put into words how excited I am to be returning home as undisputed champion and fighting in front of all my fans in Flint,” said Shields (9-0, 2KOs), who is coming off of a tour-de-force performance in a 10-round whitewash of Christina Hammer this past April in Atlantic City.

Lomachenko climbed off the canvas to win his lightweight title in his 12th pro fight, adding the strap to a collection that included reigns at 126- and 130-pounds. His feat was matched four months later by Japan’s Tanaka, whom outpointed Sho Kimura in the 2018 Fight of the Year last September to win a flyweight title after having previously reigned at strawweight and junior flyweight. 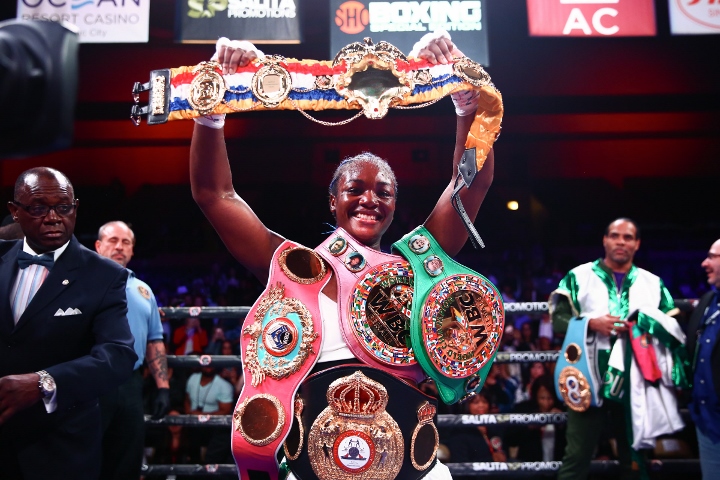 “Having the opportunity to become world champion in a third weight division faster than any man or woman in boxing history will make August 17 a night I will cherish forever,” notes Shields, the only American boxer in history to capture back-to-back Olympic Gold medals. “It’s another big step forward in lifting women’s boxing on the road to equality.”

Added Dmitry Salita, Shields’ career-long promoter: "I am delighted to promote another historic event featuring Claressa Shields, who strives to make history at a record-setting pace when she challenges herself to go down in weight to win a third division title against a very skilled and motivated fighter in Ivana Habazin. Fans attending the fight at the Dort Center in Flint, as well as those watching the fight live on SHOWTIME, will be treated to another historic and exciting night of boxing featuring Shields.”

Standing in her way is Croatia’s Habazin (20-3, 7KOs), who hopes to once again avoid the wrong side of history.

The 29-year old previously held a welterweight title, conceding the strap to unbeaten pound-for-pound queen Cecilia Braekhus who became the first female boxer in history to claim all four major titles in a single weight class following their Sept. 2014 clash.

Now in her U.S. debut, the former titlist looks to become a two-division champ.

“I’m honored to fight on SHOWTIME and to be making my debut in the U.S.,” said Habazin. “It’s a dream come true and this is a huge chance for me to prove that I am one of boxing’s elite fighters.  I will not let this opportunity pass. I’m not just coming to the U.S. to fight, I’m coming for victory.

“I’m actually a big fan of Claressa. She made history for women’s boxing and will be a great opponent for me. She’s very confident in herself, she’s aggressive, she can move, she has speed and good defense. But I have all of this too, and I can punch. I can’t wait to see what she is made of. They said her fight against Hammer was the biggest of all time, but I think this one will be the greatest ever.”

The bout will headline a hybrid Showtime Boxing: Special Edition telecast, live from Dort Federal Event Center in Flint, Mich. It will mark Shields’ fifth time fighting in her home state and first directly in her hometown, the previous four occasions coming roughly 90 minutes away in Detroit.

Her latest is not only a true homecoming, but serves as the latest major event in a growing field that continues to fight for its proper respect in the marketplace.

“The world's attention will be on women's' sports this summer with two of its' biggest events,” notes Salita. “The FIFA Women's World Cup, which is just getting started, and another Shields' blockbuster event happening in August.

“We’re continuing our goal of advancing the state of women's sports to new heights and Claressa’s greatness helps make this happen."

[QUOTE=Jasonlboro;19823725]I don't want to hate on this but they really need to be a bit more honest about the scope of this achievement. There are 25 middleweight professionals in women’s world boxing and 17 at super middle. So Claressa is…

Legendary...Shields is the best women’s boxer out rn and its not even close.

I think people are just concerned with Ivana Habazin blowing me... people are more interested in that than this fight.

Clarissa vs GGG since she said she can compete with dudes and win.

Good for her. I hope she does it. It's gonna be harder to deny her her FGOAT status before long, if she stays focused.