As the two-time Olympic gold medallist prepares for her bout against Szilvia Szabados on March 10 on Showtime, her management team is busy looking ahead to what would be the biggest fight in all of women's boxing: A showdown with WBC middleweight champion Christina Hammer.

According to Shields' manager Mark Taffet, talks have already started between both camps for a fight in the near future.

"Our goal is to fight against Christina Hammer for the middleweight championship before the middle of next year, pure and simple," said Taffet. "We have had some wonderful discussions with Christina's team. They are very bright, creative professionals. We respect the fact that she's the champion and we will talk with them about what they want to do with their fighter, as well as what the economics are. I'm confident that between our respect for her championship, and both parties' desire to create an event that maximizes revenue and lifts women's boxing to the highest level, we will have no problem coming to an agreement that will work for all." 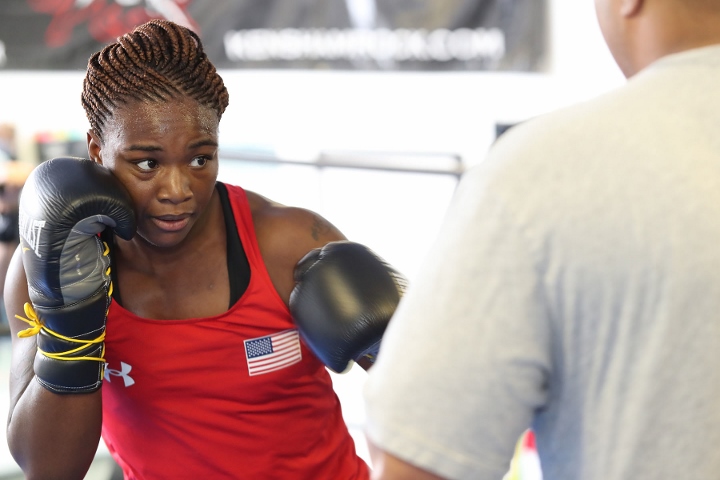 Hammer, who also holds the WBO title, is set to defend her WBC strap on April 1 in her homeland of Germany against Maria Lindberg, a show which also features the cruiserweight clash between Marco Huck and Mairis Breidis.

Throughout her illustrious career, the 26-year old has made 10 successful title defenses, and is one of the most popular fighters in Germany regardless of gender.

“Christina is a very confident, game fighter, and she wants to make history herself. Not just in her home country, but around the world, and in particularly, she has the desire to become a star in the United States. Claressa Shields clearly satisfies the bill on all those fronts, and there's nothing Claressa wants to do more than challenge Christina for her titles in a reasonable timeframe.”

Shields' upcoming bout on ShoBox, which marks the first women's main event in the history of Showtime, will be for the NABF middleweight title. The NABF, of course, is a subsidiary of the WBC, which of course is the sanctioning body of a title Hammer holds.

“We will continue to look at unique aspects of each one of her fights so we can accelerate her trajectory and women's boxing, and women's sport at the same time,” said Taffet.

WTF are you all smoking? Obviously she caught the eyes of TV Execs and she is gaining sponsors. She is aiming high. She is creating a fan base of all races, albeit a slow process. Stop being ignorant. Now, I…

Stupid comment, considering he's not known as a big puncher, besides everyone's on roids nowadays

Last time I checked this check was representing USA, not black, white, yellow, green or red... It's sad that in 2017 people still expect a fan base based on race, SMH

[QUOTE=AddiX;17467040]This girl should be a star with her accomplishments, I was pretty surprised black folk really didn't give a crap about her. She got no support.[/QUOTE] Why don't white Americans support her? She's from the same country as they are.