Claressa Shields To Be Ringside in UK For Cameron-Sanchez

WBC, IBF, WBO and WBA world middleweight champion ‘T-Rex’ is in the UK sparring Hannah Rankin ahead of the latter’s own world title tilt and will travel to London to watch a bill that includes Chantelle Cameron’s WBC world super-lightweight title final eliminator against Anahi Ester Sanchez.

As she prepares for her first visit to an iconic venue, Shields is eager to see another leading light of women’s boxing in Cameron up close and personal. 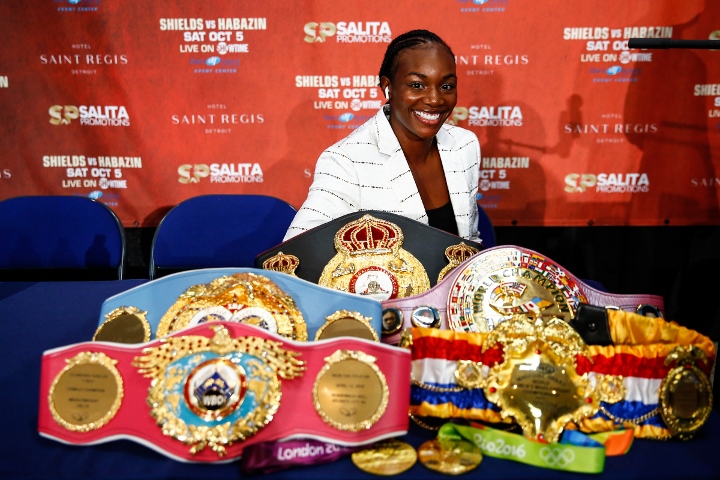 Shields said: “I like Chantelle Cameron’s boxing skills. I believe it was last year I became a fan. I don’t know much about Sanchez but I know Chantelle has a lot of power in her punches.

“As well as the power, Chantelle moves her head well and has great balance. That makes her a good fighter and I’m excited to see her match up-close and in person.

“It’s exciting times to be a female boxer right now. We have had super-fights and there are many more to come. The money is going up and so is the TV time. I’m happy but never satisfied!”

Shields has previously been linked to a future clash with former elite amateur rival Savannah Marshall but with Hartlepool’s boxing heroine likely to accompany Cameron into the ring, the American insists there’s no bad blood between the two.

Shields said: “I have no beef with Savannah Marshall. I’m just a fighter who wants to avenge a loss from my childhood! Other than that, I’ve seen her before at Floyd Mayweather’s gym and we were friendly.

“I don’t hate Savannah. I don’t know who created that narrative. I’m the two-time Olympic champion, an undisputed champion and a two-division champion, so my career is going great.

“Being an icon for women’s boxing is great. I feel like I set a new wave and put a new perspective of how people look at women’s boxing. There’s a lot more respect.

“My message to the youngsters wanting to take up boxing is to not be afraid to be different and always follow your heart. The reason I box is because I love it. I love fighting, the art of war and I just love competing. So if you have that too, do it!”

[QUOTE=marvin douglas;20173315]Only if the guy turns his back. If not, the coward just walks away[/QUOTE] Yup! Her posse is sure to sucker punch someone

[QUOTE=ShaneMosleySr;20172605]Is her brother going to punch anyone in the back of the head?[/QUOTE] Only if the guy turns his back. If not, the coward just walks away

Get rid of her. She is a scum bag hood rat that brings down the image of boxing.

Is her brother going to punch anyone in the back of the head?