Claressa Shields and Ivana Habazin will both be looking to settle a score on January 10th, when they collide for the vacant WBC, WBO junior middleweight world titles.

The Showtime televised contest will happen at the Ocean Casino Resort in Atlantic City, N.J.

They were scheduled to clash last year, but the fight was canceled at the weigh-in, after a war of words erupted and Habazin's trainer, James Ali Bashir, was knocked out cold by Shields' brother. In the aftermath, Shields’ brother Artis Mack was arrested and charged with assault. 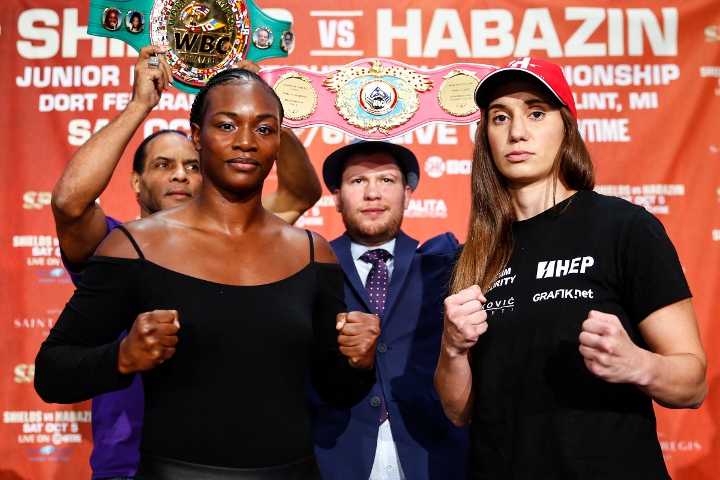 Since that incident happened, the two of them have been trading very harsh words.

Shields believes that Habazin has unfairly her a villain in the media.

“She’s just another opponent,” Shields said to bjpenn.com. “She’s not anybody special and she may have worked her way up through the ranks to fight for these belts but our skills do not compare. I’m going to walk all over her. Skill wise, she does a lot of covering up and, I’m sorry, but she’s soft. I have no respect for the girl, she’s just soft. The only good thing I’ll say about her is she has good hand speed but she don’t have no head movement. My skills are just way above all of the women in women’s boxing.

“The [main] reason why she gets no respect is how she carried herself after the incident [at the weigh-ins in October]. She started playing the victim, trying to call me a thug, like I had anything to do with the incident. She wasn’t being a sports-like person, not understanding that we both trained hard to make that fight happen. The incident didn’t just affect her, it affected me also.

"She went on this little race rant, I’m a thug, I’m a gangster. I ain’t never been to jail. It made me not like her as a person and when I don’t like them as a person, I go out to put the beatdown on them worse.”

[QUOTE=.!WAR RUIZ!..;20309513]I think clarissa shields sucks, she has no punch placements, he jsut throws em how he trains and hope they land.[/QUOTE] Very good point It’s like she’s got no flow She always has her head down kind of like…

[QUOTE=Marchegiano;20310660]All the bold is fair. To the forme; bad people can be great fighters. I don't care and don't understand why y'all do. You can't moral police the planet.[/QUOTE] I didn't say Shields shouldn't be allowed to fight. I'm not…

[QUOTE=famicommander;20309539]That's fine. She can talk all the trash and be as angry as she wants. What I have a problem with is her relatives showing up and sucker punching the elderly, and Shields' absurd opinion of herself. [B]She acts like…

[QUOTE=ShaneMosleySr;20309525]Is it too much to expect them to be somewhat of a sane human being?[/QUOTE] I'm inclined to believe a bit of insanity does well in the ring.

[QUOTE=PBR Streetgang;20308069]I don't recall Habazin bringing race into the issue (and it would be stupid and ignorant on her part of she did). Thugs come in all races, religions and creeds. Habazin's trainer is African American so that allegation seems…