Claressa Shields: I Don't Condone Violence Outside The Ring

This past Saturday night, two division world champion Claressa Shields had hoped to win her third divisional title - as she was scheduled to face Ivana Habazin for the vacant WBC, WBO junior middleweight titles - in a Showtime televised main event.

But in a boxing first, the fight was canceled due to a violent altercation at Friday's weigh-in.

After an argument between Shields' sister and Habazin's trainer, James Ali Bashir - someone sucker-punched the veteran coach and knocked him out cold. Habazin ran to her trainer's side, as he was bleeding and unconscious on the floor. 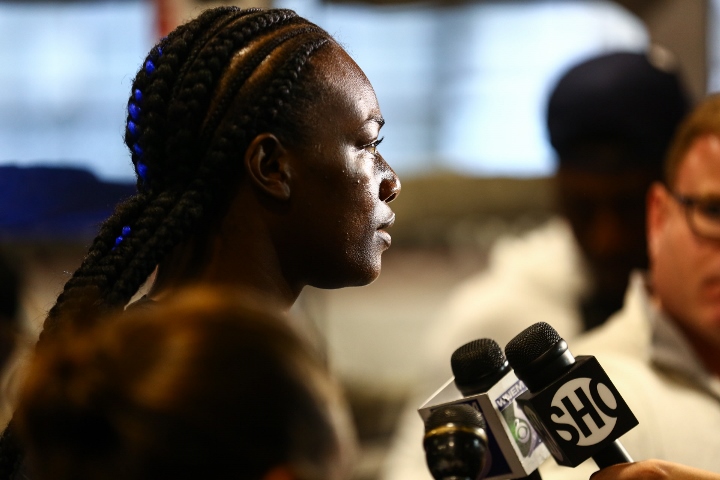 Habazin never weighed in. She instead left with her trainer, who transported by ambulance to a local hospital. He underwent emergency surgery for facial injuries.

A source told ABC12, that the suspect who knocked the trainer out was Shields' brother. A suspect was arrested in the aftermath, but police have not officially released his name.

Shields is not happy with what transpired.

"I was so focused just on the fight. I'm focused on making sure I do everything possible to make sure the fight happens. I just removed me and my team from the situation, and then from there, I don't know what happened," Shields said to ABC12.

"I wanted to bring some of that hope and happiness back here to Flint to uplift the city with everything we're going through. It's a huge disappointment. [I understand why Habazin withdrew because] that's the man who's been in your corner your whole four months of camp. He needs to be there when you fight for the world title, so I definitely understand that."

[QUOTE=Adamsc151;20111660]Funny how people only ask for proof when they know it can no longer be found. I'd counter with; where's the proof that Breazeale is the one that started the public violence?[/QUOTE] It really doesn't matter at this point, they…

That idiot woman was blocking Bashir's view when Shields went on the scale. She pushed Bashir and it escalated from there. Bashir is from another generation. You don't shove and talk **** like that to a man from his generation…

[QUOTE=MastaBlasta;20111133]Prayers and more for Mr. Bashir. It's unfortunate all the way around. But, Mr. Bashir went after the sister after they were separated and moved in different directions to different areas of the room. He continued to talk violence and…

[QUOTE=ShoulderRoll;20108114]In a previous reply to me you said that the person who instigated and caused the sucker punch was employed by Shields. But now you're saying that a person cannot instigate a sucker punch. So which is it? You're all…