Claressa Shields Fires Back at Laila Ali: You're All Bark, No Bite!

Three division world champion Claressa Shields (10-0, 2 KOs) would love to get in the ring with retired boxer Laila Ali.

Ali, who retired in 2007 with a record of 24-0 with 21 knockouts, was critical of Shields and her level of opposition in a recent interview.

She disputed Shields' claim of being the "Greatest Woman of All Time" during an appearance on the 'Sway in the Morning' show, and explained that she's confident Shields would have never won if they had met in the ring. 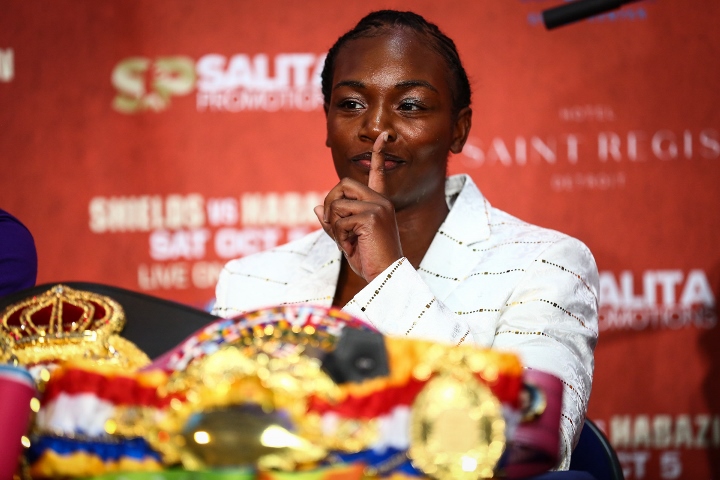 Shields, 24-years-old, holds the WBC, WBO world titles at junior middleweight and is also the undisputed world champion at middleweight.

She believes Ali should come out of retirement to back up her words.

"Let's just keep it honest. Don't say that I'm not talented because I'm the most talented female fighter there has been in the history of boxing. Laila Ali is all bark, no bite. If a girl call me out, I answer. She fought against soccer moms and probably strippers or something. I fight real fighters," Shields told TMZ Sports.

Ali reportedly would consider the possibility of coming out of retirement if someone placed $10 million on the table. Shields has a plan - where they should fight and the winner would receive the $10 million.

"The loser gets $5 million. The winner gets $10 million," Shields said. "We can make it happen if she really wants to make it happen."

Shields was in action last week, when she dominated Ivana Habazin in Atlantic City to become a three division world champion by capturing the vacant WBO, WBC titles with a lopsided unanimous decision win.

[QUOTE=alexguiness;20338445]If you already [B]KNOW [/B]the moral compasses of 75% of people who post here, why even ask that question? Surely your superior skills of perception can do that for you...[/QUOTE] Why the deflection? It was a simple question directed at…

[QUOTE=ShaneMosleySr;20337889]She’s an a$$hole. That’s enough for me to not like her. I don’t like Sergey Kovalev, Adrien Broner or Floyd Mayweather either.[/QUOTE] Difference is. Those guys are actual criminals who've hurt people. She says "I'm the best". Great criteria

[QUOTE=KnickTillDeaTh;20338336]I dont rightly care what anybody calls Shields, mainly because I'd say about 75% or more of the people who post here are guaranteed to be worst human beings than Shields. I just thought it was funny, and made me…

Laila Ali was a fabricated fighter, the female Sven Ottke no doubt about it. Her whole career was one big walk-over, just because of who her daddy was. Avoided Ann Wolfe like the plague. Claressa Shields on the other hand…

[QUOTE=alexguiness;20338172]Yep. But if you call her out on that stuff guess what? You are a racist, sexist, misogynist virgin who lives in moms basement...[/QUOTE] I dont rightly care what anybody calls Shields, mainly because I'd say about 75% or more…