It’s not the biggest women’s fight of all time.

Fans of a certain age remember Laila Ali and Jackie Frazier gracing the cover of TV Guide together when that was still a big deal. Considering the career Ali went on to have, what was treated then like a bit of a sideshow ended up being an important step in a real ring tenure.

That’s just one example. Women’s boxing has also had some serious audiences overseas for years. So, okay, make a case that there have been bigger women’s fights.

In the US market though, chalk this one up as maybe the most important boxing match between women since at least the breakthrough of Christy Martin on the undercard of Mike Tyson-Frank Bruno II. We have a fight that has been built, slightly delayed, promoted, and culminates with a four-belt unification.

If they deliver the goods on Saturday (Showtime, 9 PM EST), the winner could be a real star. If it is the two-time US Olympic gold medalist, the chances of stardom loom larger. 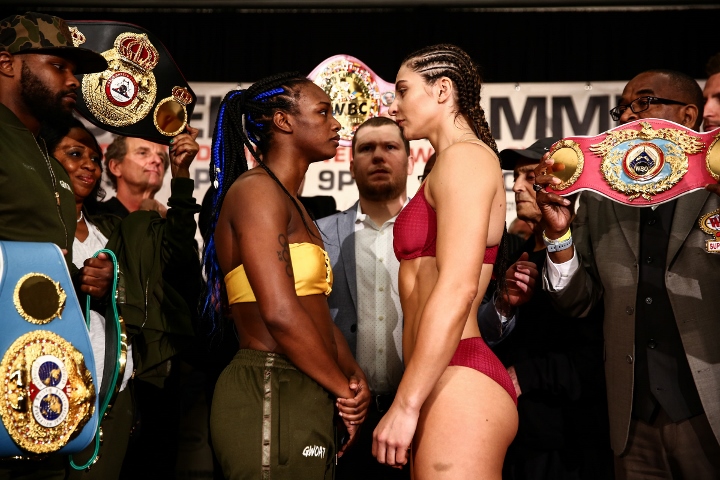 The Case for Shields: Shields is younger and has worked her way down the scale from super middleweight in her early fights. It should be applauded, as the depth in the women’s game gets better farther down the scale. It’s not clear watching on tape that has the speed advantage though Shields appears to have an edge in fluidity and at close quarters. For Shields to win, getting close and taking away the jab of Hammer increases her chances to shine. Hammer is at her best working off the jab, throwing combinations at mid range and then using her feet. If Shields can invade the space where she is comfortable, she can better dictate the terms of engagement.

The Case for Hammer: Hammer is a little taller, a little longer, and in professional terms much more experienced. She’s been in professional title fights since before Shields went to her first Olympics and Hammer still isn’t 30 years old. Her ability to use her length, working off a stiff, sharp jab, and tie up at close quarters could be a problem for Shields. If Hammer can establish the stick and frustrate Shields inside it might not make for a pretty fight but it could be effective. If her quick feet allow her to make it that much harder for Shields to catch up to her, that could mean rounds in the bank for Hammer as well.

The Pick: Shields may not have the professional experience of Hammer but her amateur tenure makes up for a lot of that. Shields holds home turf here which could matter in close rounds. Ultimately, what probably matters more is the greater diversity of Shields game. Both fighters are capable outside and at mid-range. Shields, while still refining her inside game, has shown off a body attack in some of her limited career to date and it will be needed and effective on Saturday. Looks for some frenetic, wild exchanges in the first few rounds that settle into a more grinding encounter that favors Shields by decision at the end of the night.

Claressa Shields by decision. Hoping for a good entertaining fight. May the best woman win.