The 31-year-old was making the second defence of his Lonsdale belt, plus the first of his Commonwealth which he won from Paddy Gallagher in August, and looked to have a challenging task on his hands against the underdog from the opening round. Taylor came out for the first confidently and looked every inch a worthy challenger as he proved to be the champion’s equal jabbing well and throwing relaxed combinations. The 28-year-old also began warming up his uppercut to Jenkins’ body late on in the round.

If the first three minutes were a boost to Taylor’s chances the second took it to another level as the Middleton fighter dropped Jenkins after a succession of looping right hands to the temple which eventually saw the favourite take a knee inside the first twenty seconds. Jenkins gave an argument for a 9-9 score however as he rallied back with his usual tenacity showing no ill effects of the knockdown. The pair then shared a wild exchange in the final thirty seconds to provide a memorable round in the night’s opening television bout for promoter Frank Warren’s ‘Midlands Mayhem’ card. 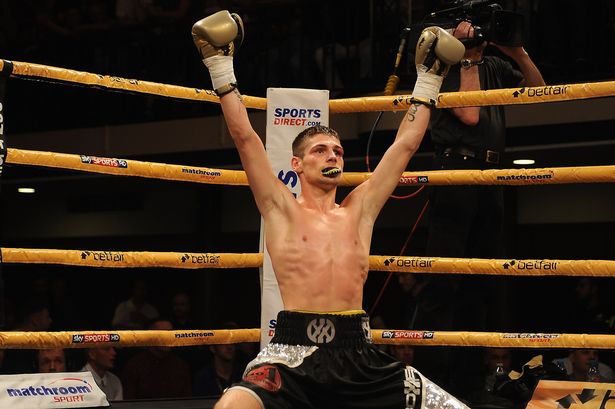 Understandably the pace slowed in the third with Jenkins taking business to the centre of the ring controlling matters with the fundamentals, and just as Taylor’s shots looked to have had the sting taken out of them he found another gear to pick up the pace near the end to remind the champion he wasn’t going away.

Jenkins was now finding his groove in the fourth rolling on the inside while throwing shots to Taylor’s body who was never deterred. The champion’s confidence was there for all to see dropping his left hand and despite looking like a hittable target he found a home for an eye catching single right hand. Then with just four seconds remaining in the fourth Taylor moved in with his head causing an accidental clash which gave Jenkins yet another cut in a career littered with lacerations. Referee Steve Gray called for the ringside physician and matters were concluded shortly after with Mr Gray ending the bout.

Jenkins hangs on to his title in a fight that was looking like terrific value for money. There may be a rematch somewhere down the line but Taylor will have to find himself a position in a queue beginning to form to take on the champion from Swansea.

In tonight’s earlier action River Wilson-Bent kicked proceedings off with a 40-36 points win over Lithuania’s Zygimantas Butkevicius (2-30). The 25-year-old Warwickshire middleweight extends his unbeaten record to (6-0, 2 KOs) in what was his fourth contest of 2019.

Yorkshire’s George Davey, 22, followed up on his pro debut win in October to make it two out of two with a 40-36 points win over Dale Arrowsmith (2-33-1, 1 KO) at super welterweight.

The 40-36 scoring theme over four rounds continued in the next contest when super lightweight Ethan James outpointed Daryl Pearce (1-5). The 19-year-old from Northampton moves to (2-0).