Chisora's Coach Does Not See Usyk as The Right Fight

Dereck Chisora got back in the positive column with a rather forgettable win.

The heavyweight was knocked out by Dillian Whyte back in December.

Chisora took on Senad Gashi at the O2 Arena in London. 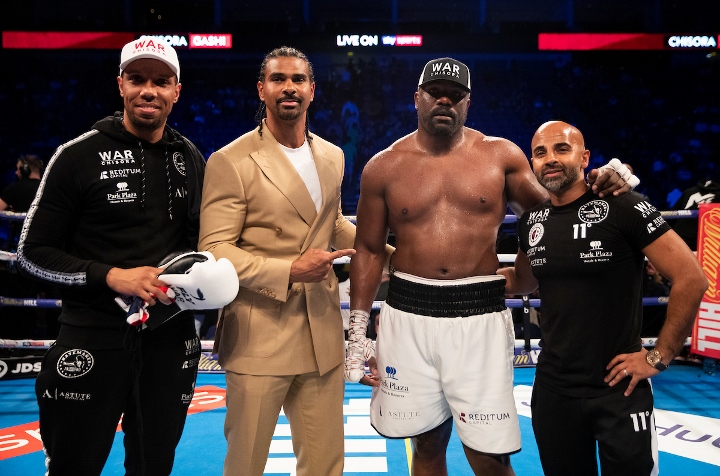 And after teaming up with new trainer Dave Coldwell and relocating from London to Rotherham, the Finchley man secured a points win over the man who was on the wrong end of a defeat to Carlos Takam, exclusively live on Sky Sports in the UK and DAZN Stateside.

Chisora, now 30-9 with 21 quick, will look to build on the win against Gashi under Coldwell and will hope that another date is forthcoming sooner rather than later.

Further details regarding Chisora’s next move will be revealed in due course, but the likelihood of seeing Gashi back on these shores is very slim.

Last week, Chisora said he was very interested in a potential clash with the newest heavyweight kid on the block, Oleksandr Usyk.

Usyk, who unified the entire cruiserweight division in 2018, will make his heavyweight debut next month against Carlos Takam, who Chisora knocked out in dramatic fashion last year.

But if Usyk comes calling, Coldwell would not advise Chisora to take that fight.

Coldwell previously prepared Tony Bellew for a November 2018 clash with Usyk. And the Olympic gold medal winner scored a vicious knockout to send Bellew into retirement.

“I said to Dereck, you don’t need that fight. Style wise Usyk is very, very good. That style with Usyk not being a lumbering sort of giant but very, very mobile, is the wrong style for Dereck.”

Sh^t man I can't blame Chisora here. Usyk is a difficult guy. Hell man I doubt ANYONE is excited to fight Usyk with how he moves & with his fight IQ. Its a long night win or lose for most…

It would be the same as the Gashi fight but worse. Usuck runs and pitty pats and everyone falls a sleep.

Of course it's a bad fight for Chisora, it's career suicide at this stage..

[QUOTE=1hourRun;19684033]Dereck Chisora is aware of the pummeling that Olek inflicts on British club-fighters. Tyson Fury ( the coward deserter ) no doubt would also keep his distance from Usyk. Will Hughie Fury clear the smear of defeat that Oleksandr has…