Chisora: No One Wants Whyte vs. Luis Ortiz, I Bring The Money!

Heavyweight contender Dereck Chisora believes that a deal will get done for a rematch with heated rival Dillian Whyte.

Chisora is looking to face Whyte on December 22 - the date set down for Whyte's next return to the ring.

In the last few days, Whyte has been trading words with dangerous Cuban puncher Luis Ortiz, who is willing to travel over to the UK to face Whyte on the date. And World Boxing Council President Mauricio Sulaiman is willing to approve Whyte-Ortiz as a final eliminator. 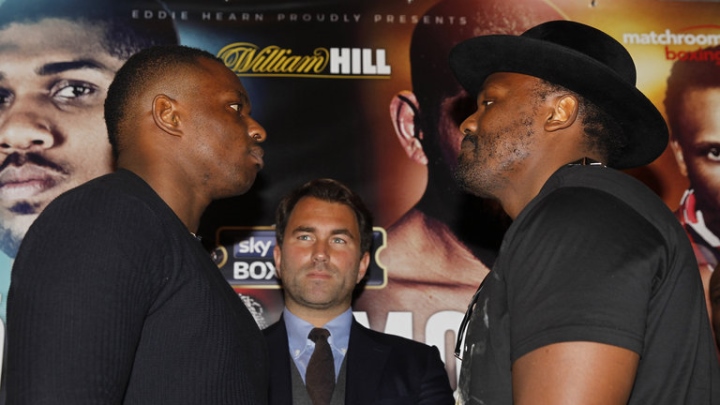 Chisora lost a very close split decision to Whyte in December of 2016. The contest was one of the most exciting heavyweight fights in recent years.

Their mutual promoter, Eddie Hearn,  is very eager to get them back in the ring.

And Chisora has been pushing to get that rematch since last year.

"Yeah, we're going to try to do the fight this week," Chisora exclusively told Sky Sports.

"We'll see what happens anyway, but we definitely want to make the fight for December 22. By the weekend, and then everything announced. We haven't started [talks], but I believe by the end of this weekend, or we'll have done it by Friday. I'm going to smash him. No one wants to see that [Whyte-Ortiz], so I don't know why he's talking about Luis Ortiz. I'm the Money Man."

If a deal is not reached with Chisora, Hearn has confirmed that Ortiz and Dominic Breazeale are the frontrunners to take his place.

"We want to make sure the December 22 card is confirmed early next week," said Hearn. "Dillian Whyte will fight on that night at the O2, and we want to make the Chisora fight.

"Widely that is the fight everyone wants to see. We do have the options of Breazeale or Ortiz as well, but we'll see if a deal can be done in the next few days with Chisora and if not, we'll move on."

[QUOTE=KnickTillDeaTh;19188870]I think you meant to say in your last sentence that you'd rather see Ortiz vs. Whyte, instead of Whyte vs Chisora? I think Chisora is dangerous in the way that boxing is an anything can happen sport, and a…

[QUOTE=Jax teller;19187789]I wouldn't say Chisora isn't a dangerous fight as a lot of guys say Whyte was gifted the fight unless they're just PBC guys hating and Hearn has never said that Chisora isnt first in line so always stating…

It was clear that Hearn used Ortiz's name to make Chisora reduce his demands. If I was Hearn, I'd offer 1-2M to Breazale to face Whyte for the mandatory spot. It'd be more money than he would get fighting Wylder.

Chisora should get a Whyte rematch.