Heavyweight contender Derek Chisora is confident that he can beat his rival, Dillian Whyte, if a trilogy fight ever comes together.

In 2016, Chisora lost a razor-close twelve round split decision to Whyte in one of the most action-packed heavyweight bouts in years. There were many observers who felt Chisora had done enough to win the fight.

The 2018 rematch had plenty of fireworks as well, with Whyte knocking Chisora out in the eleventh round. At the time of the KO, Chisora was up on two of the official scorecards. 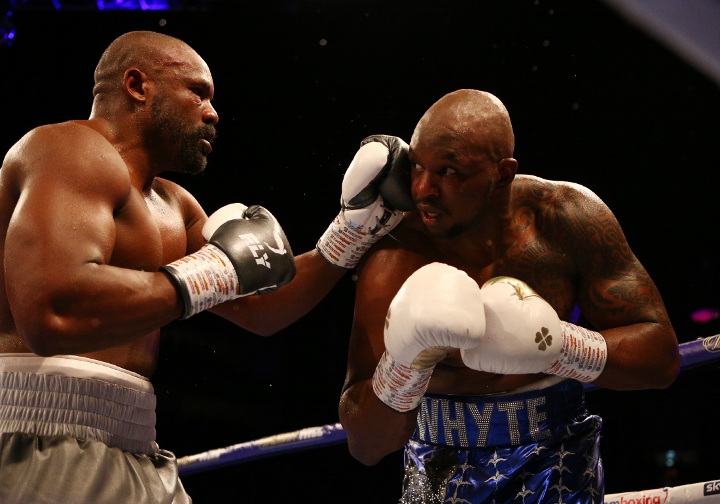 Chisora believes he was robbed of a win in the first meeting - and had to deal with an unfair referee in the rematch.

“I’m better than him. I won the first fight, they gave it to him. Then in the second fight, I had a funny ref," Chisora told Talk Sport.

“I will push for get another fight and a rematch against Dillian. 100 percent.”

Both boxers have scheduled fights in the summer.

Both fights were scheduled to take place this month and ultimately postponed due to the coronavirus pandemic. There is no official word regarding the new dates and locations for both events.

Chisora also chimed in on the latest rumblings that former champions Mike Tyson and Evander Holyfield were looking to come out of retirement for exhibition bouts - and there is talk they might fight each other in a trilogy.

“I think he [Holyfield] should fight Mike Tyson. I’d like to see it. Shannon Briggs should also fight – I said to David [Haye] he should fight Shannon Briggs and he goes, ‘No, I’m not ready for that yet’ – but he might. Anybody can come out of retirement. Remember that. Boxing is an unbelievable sport and it’s an addiction," Chisora said.

Don't think so. Give Whyte his due. I don't think he's better than Ruiz or Dubois, maybe even Miller, but definitely better than Chisora.

[QUOTE=Jkp;20569759]Whytes an awful boxer. Did you not see him go life and death with 40 year old corpse wach, and get dropped by midget rivas?[/QUOTE] Have you seen Wilder do anything remotely to do with boxing in the ring? He…

[QUOTE=Jkp;20569755]Whytes ducked almost the entire top 10. Including sevaral mandatory eliminators and his shot at 3 world titles against AJ last year. Instead he cherry picked midget nobody rivas and 40 year old dinosaur wach. Do some research before making…

They were both close fights. First one could have gone either way on the scorecards, second one was playing out pretty much the same until the late KO. I dont think that really justifies a third though. Chisora got another…