Still in the infancies of their careers, twins Jermall and Jermell Charlo had already envisioned blazing distinct individual trails through the sport while forging a synergy that capitalized on the fact that they shared identical DNA.

For the most part, they have done just that. They have campaigned in different divisions since 2016 and maximized their exposure by headlining their own events and fighting on the same card. On Saturday, the Charlos, 30, hit a new milestone by co-starring in their first pay-per-view doubleheader on Showtime, a feat neither one has the selling power to accomplish on his own at this juncture of their careers. 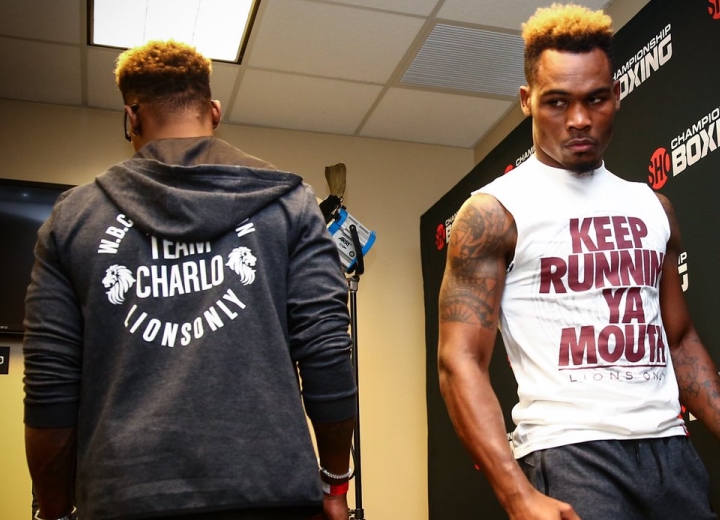 At 160 pounds, Jermall (30-0, 22 KOs) defends a title previously held by Saul "Canelo" Alvarez (who has unfinished business in three separate divisions) that he did not win the ring but was awarded to him through some ridiculous new policy that the self-serving alphabet organization enacted overnight. His opponent is 34-year-old Ukrainian Sergiy Derevyanchenko (13-2, 10 KOs) who has half as many fights in the pro ranks as Jermall.

Jermell (33-1, 17 KOs) takes on Dominican Jeison Rosario (20-1-1, 14 KOs) for three of the four major world titles in the 154-pound division; Jermell owns one and Rosario two. Short of a draw, either Jermell or Rosario will see their stock skyrocket with three world title belts wrapped around his waist.

But contrary to what it looks like on paper, Jermall has the tougher assignment on this particular card. Let's take a closer look at the twins' respective opponents.

Despite his sparse pro record, Derevyanchenko was one of those hidden talents that every boxing insider knew was of top-notch pedigree the minute they saw him fight or even spar. He cut his teeth in the sport with a long and distinguished amateur career which more than makes up for the numbers he lacks in the pro ranks.

Ironically, it is Derevyanchenko's two losses that speak most about his toughness, grit and ring IQ. Both were razor-close decisions against elite knockout artists - Danny Jacobs via split decision in 2018 and Gennady Golovkin via unanimous decision in 2019. Had Derevyanchenko avoided first-round knockdowns in both bouts, his record might well be 13-0-2 or 14-0-1, depending on how the judges scored the opening round in each fight. Most impressively, though, Derevyanchenko has been the only fighter to date to have visibly hurt the usually solid-as-a-cinderblock Golovkin.

As for Jermell's opponent, Rosario's career-defining moment came via his fifth-round TKO over Julian Williams from whom he wrested his two world titles. But prior to that, the quality of his opponents was rather pedestrian and unexceptional. He suffered a TKO loss to hard-hitting but limited Nathaniel Gallimore in 2017 and eked out a split decision victory in 2019 over Jorge Cota, whom Jermell effortlessly blasted out in three rounds in Cota's next fight.

Most significantly, though, let's take a few steps back and consider the caliber of the man Rosario beat that made him a double belt-holder. Executing his game plan to perfection, Williams, who was stopped by Jermall in 2016, pulled off a monumental upset with the most inspired performance of his life in 2019, dropping and outpointing Jarett Hurd to seize the two alphabet belts. But that was probably the pinnacle of Williams' career, when all the stars in the universe aligned themselves to allow him to shine like never before ... but never again.

Against Rosario, Williams appeared to revert back to the well-schooled albeit garden-variety contender he was prior to his dethroning of Hurd. Might Rosario's victory over Williams be the same once-in-a-lifetime triumph never to be repeated again?

Going to a buddies house to watch the UFC fights. Maybe I’ll find a stream on my phone.

[QUOTE=Bigchip;20778751]Yessir. Unfortunately they are stuck with the ppv model moving forward.[/QUOTE] Lol...Yeah stuck making all that money. How is DAZN doing Again?

[QUOTE=boxingitis;20778636]Loma vs Lopez is better than this and its Free on ESPN.[/QUOTE] The fight is intriguing. But the fallacy in this statement is Loma vs Lopez probably should have been PPV. I would have paid for that one Easy.

Yessir. Unfortunately they are stuck with the ppv model moving forward.