Dennis Hogan has his work cut out for him Saturday night.

That was obvious as the Irish contender stood before unbeaten WBC world middleweight champion Jermall Charlo at their weigh-in Friday at The Tillary hotel in Brooklyn. The 5-feet-8 Hogan had to look up as he tried to look into the 6-foot Charlo’s eyes once they both met their contractual obligations on the scale. 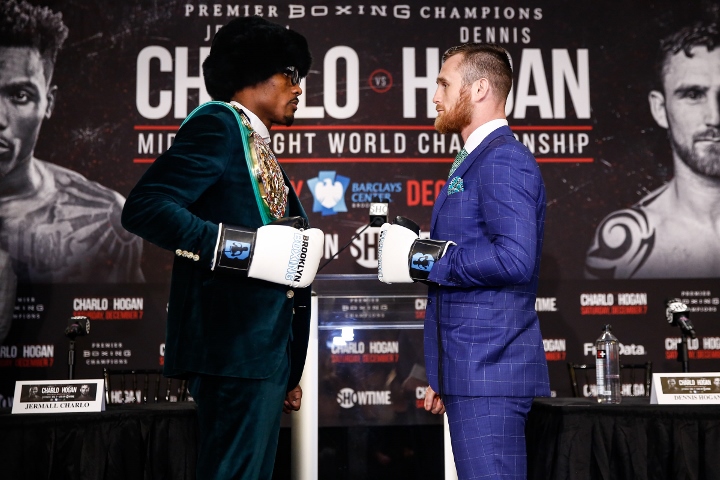 Some oddsmakers have listed the 29-year-old Charlo as a 25-1 favorite to beat the 34-year-old Hogan in their 12-round, 160-pound championship match. Showtime will televise Charlo-Hogan as the main event of a tripleheader scheduled to start at 9 p.m. ET/6 p.m. PT.

Earlier Friday, Chris Eubank Jr. and Matt Korobov both made weight for their own 12-round, 160-pound title bout.

The 30-year-old Eubank, who’ll make his debut in the United States, and the 36-year-old Korobov will fight for the WBA’s interim middleweight title.

Marlon Tapales and Ryosuke Iwasa also came in under the limit Friday for their 12-round, 122-pound title fight, which will open Showtime’s telecast.

Tapales, 27, and Iwasa, 29, will fight for the IBF’s interim super bantamweight title.

Hogan will have Jeff Horn's coach in his corner, this same coach failed big time when cornering for Horn against Crawford, according to those who could hear all he could say was to tell Horn to keep going you're winning.…

I can't stand the Charlo brothers but unfortunately for me in this case i watch boxing for the fights not the personalities...and based on the photos...I think Hogan is in for a decent beating. My only saving grace would be…

Dennis Hogan is a nice package but I think he's an overachiever. He might make a great trainer one day. He seems too small for the weight he fights at and he doesn't have fight changing power. On the other…

Hogan seems like a good fighter. The worry is he only has 7 knockouts in 31 fights, so he has to outpoint Charlo. The winner will probably have to defend against the winner of Korobov-Eubank jr.