Charlie Edwards once again called out Kal Yafai after the best display of his career.

The former British super-flyweight and ex-English flyweight king wants a crack at the WBA world champion.

Edwards, 25, knocked out Anthony Nelson inside three rounds, exclusively live on Sky Sports, at the Metro Radio Arena in Newcastle. 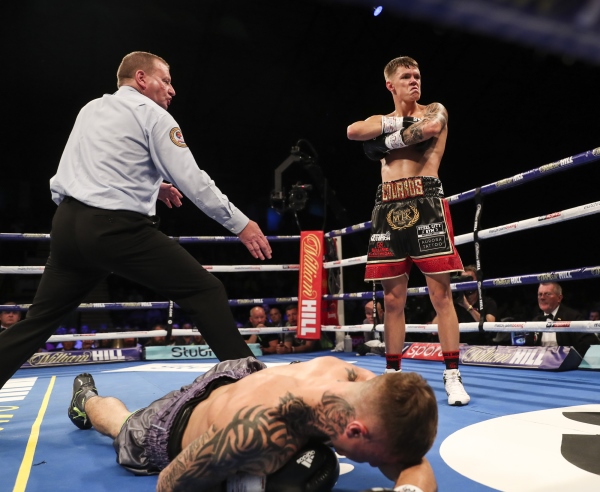 With the victory, the former IBF world flyweight title challenger claimed the vacant WBA Continental belt which secured him a top-10 ranking with the sanctioning body whose champ is Birmingham fighter Yafai.

Nelson, who was on the wrong end of a fight of the year contender against Jamie Conlan for the Commonwealth title at 115lbs back in April 2016, was outgunned from beginning to end by Edwards in his first fight under Grant Smith at the Steel City gym in Sheffield after he left Adam Booth earlier this year.

“I think I sent out a big statement," Edwards told Sky Sports shortly after the fight.

“We're planting my feet a lot more and, as you can see, the power is coming.”

Then came the direct call out of Yafai.

"Kal Yafai, you can't run forever, mate,” he continued. "I know I can beat him, I’ve sparred many rounds with him and he's there for the taking.”

Eddie Hearn, the promoter of both Edwards and Yafai, said that the fight would be “perfect” if the fights with the likes of Roman Gonzalez or Jerwin Ancajas, the IBF champion, weren’t available for the current WBA king.

Arfan Iqbal retained his English cruiserweight title after a 10-round draw.

Iqbal was in with Simon Vallily, a former top amateur who is now 13-1-1, at the Metro Radio Arena in Newcastle.

The fight was rescheduled for this card after injury to the champion forced the original date for the showdown, February 17, on the undercard of George Groves’ World Boxing Super Series semi-final victory over Chris Eubank Jr. at Manchester Arena, to be scrapped.

And it proved a rather messy beginning to the Sky Sports coverage of the card which will be topped by Lewis Ritson’s third British lightweight title defence against mandatory challenger Paul Hyland Jr. and Josh Kelly’s challenge of Kris George for the Commonwealth welterweight title.

It was a fight that saw Vallily deducted two points –– one in round seven and again in the following stanza –– by referee Marcus McDonnell and one that was, after 10 rounds in a fight of two halves, scored, 96-92 to Vallily, 95-94 to Iqbal, and the final tally was 94-94.

A rematch could well be on the cards, but it was a rather forgettable fight, if the truth be told.

I’d quite like to see him fight Prince Patel after his IFL interview.

Trying to talk his way into this fight