Charlie Edwards: Martinez Defense Will Bring Out The Best in Me

If Charlie Edwards was looking for something to make him stand out, his bold new look may have done the trick. The 26-year-old makes the second defence of his WBC flyweight title against Julio Cesar Martinez on Saturday night and believes his new blond hair is a sign of his growing confidence.

To call Edwards’s hair blond is an understatement – it’s white. When he first walked into the gym with his new look there were a few comments, but he didn’t care.

“I wanted to do it for a long time, but I didn’t have the confidence because I always worried what people thought,” Edwards said. “Now I’m not arsed what others think, I’m just being me, I’m enjoying it and just expressing myself.  I like it. I’m being me and being true to myself, rather than just trying to fit in.

“I’m not blond, I am mousy brown. But this is proper blond. It’s just something that I wanted to do. When I was very young, this used to be my natural colour hair. My features suit it, I’ve got blue eyes. I suppose it gets me out there a bit more. People see a drastic change and think I am having a quarter-life crisis. I feel comfortable with myself as a person.” 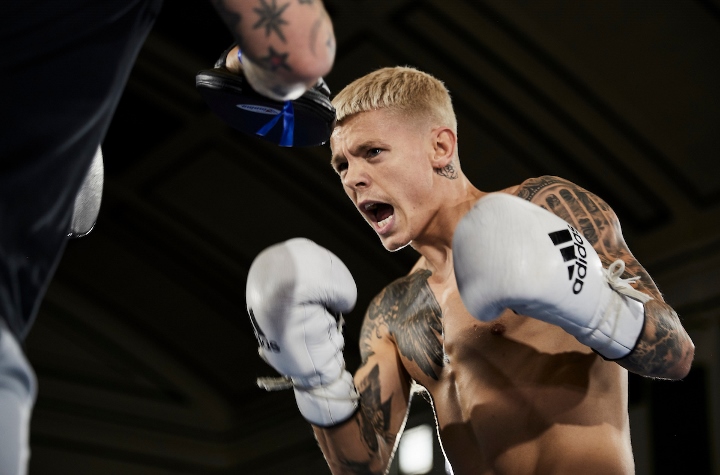 Edwards has been a world champion for eight months now, but it has only been recently that he started to really believe it.

“I’m 15 years deep into boxing,” he said. “From a young kid I have always dreamed of this moment. It was a few weeks after my last defence that it finally sunk in. It lifted me, made me go to another level. I have a duty and nobody is taking this title away from me. I’m in a real good place and I’m not going to let that momentum slip.”

The previous British boxer to hold the WBC flyweight title was another Charlie – Magri – in 1983. Like Edwards, Magri had setbacks before achieving his goal and Edwards believes they were needed to get to the next level.

“Setbacks are vital to have because they show your character and make you work twice as hard. It takes a strong character to get through those setback. It tests your belief and helps you find out what you really want in life. The people who really want it, it will make them grow stronger.

“Charlie Magri is a great man and a great champion. A long time before I won the title he came down to my gym and I had a picture with his WBC belt. I am a big believer in the law of attraction. This has all been written for me. I posted that picture of me and him all those years ago saying I can’t wait to get my hands on my belt and I have got it.”

Martinez, from Mexico, became the WBC’s mandatory challenger after knocking out Andrew Selby in March. Edwards knows Selby well, having sparred hundreds of rounds when they were on the Great Britain squad together, but while many were shocked by Selby’s defeat, Edwards wasn’t.

“In this sport, especially the pro game, it’s a lifestyle,” Edwards said. “You have to live the life all the time and can’t be messing around outside the gym. You can’t have all the success in the amateurs and then go pro, think it’s easy and disrespect the sport.

“But that will bring out the best in me. I’ve been going to a whole new level with my trainer, Grant Smith. I believe this is going to be a scary punch perfect performance.”