Brian Castano wasn’t about to let history repeat itself—even if it means no longer carrying a major title.

The unbeaten Argentinean has officially relinquished his secondary version of the World Boxing Association (WBA) super welterweight title, in the wake of his now canceled rematch with Michel Soro. 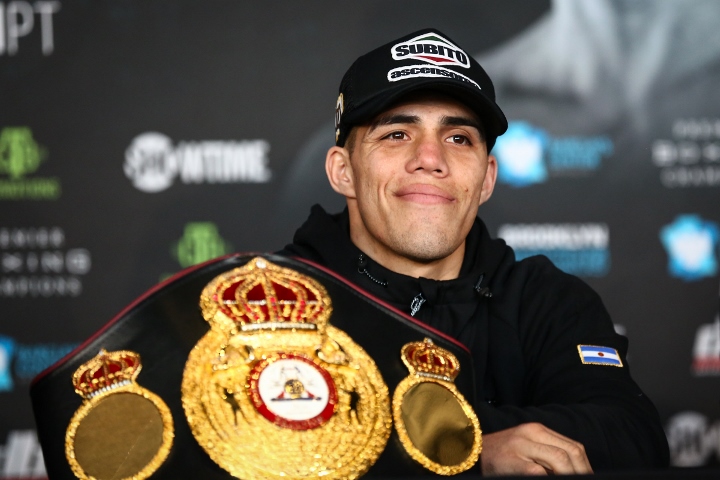 As reported earlier this month by BoxingScene.com’s Per Ake Persson, Univent, headed by longtime promoter Sebastien Acaries secured the rights to the rematch after winning a WBA-mandated purse bid. Acaries submitted a winning bid of $810,770, more than doubling the $350,000 put up by TGB Promotions, whom represents Castano on behalf of adviser Al Haymon’s Premier Boxing Champions (PBC).

The purse bid result meant Castano (15-0-1, 11KOs) would have to return to France for the rematch with Soro, with the fight due to take place in Marseille, France. The coastal city is roughly eight hours from Evian les Bains, the site of their first fight in July 2017, when Castano cleanly outfought Soro over 12 rounds only to have to settle for a split decision.

Unfortunately, the fight continued long after the official verdict as Contursi had to sue in order to get his fighter paid for the event. The matter extended well into the 4th quarter of 2017 before finally reaching resolution.

Still, it was scarring enough to not want to leave themselves open a similar situation.

Castano—who turns 30 in September—not only ends his two-plus year title reign with the move, but also loses out on a hefty payday. He was due to make more than $445,000 for the rematch, gaining the favorable end of the 55/45 purse split as per the terms of the purse bid.

The bout would have been his second of 2019. His most recent—and now final—title defense came in March, fighting to a 12-round draw with former titlist Erislandy Lara in their entertaining battle this past March in Brooklyn, New York.

Just three defenses came in his 30 months as a divisional titlist, all on the road after a 6th round stoppage of Emmaneul de Jesus to win an interim version of the belt in Argentina in Dec. 2016. Wedged in between the win over Soro and draw with Lara was a 12th round stoppage of veteran Cedric Vitu last March in Boulogne-Billacourt, France.

What should have been a third trip to France in his last four starts instead becomes the last chapter in a title reign that flew well under the radar.

"Today we have informed the WBA of our decision, to whom we are very grateful for the opportunity they gave Brian to be a great world champion,” said Contursi.

Soro will presumably fight for the vacant title on the July 20 show, although the WBA has yet to make such a determination or even comment—publicly or in response to a BoxingScene.com inquiry—on the recent development.

Despite his vacating the title, Castano remains in good company under the PBC banner. Most of the best fighters in the division are advised by Haymon, including unified WBA/IBF/IBO titlist Julian ‘J-Rock’ Williams, WBC claimant Tony Harrison, and still-relevant former titlists ‘Swift’ Jarrett Hurd, Jermell Charlo and Lara.

The trick now will be to find a way to work him into the mix and back towards title contention after having long relegated to hitting the road.

Good move by Team Castano! You shouldn't have to file a lawsuit to get paid! Castano should fight Dennis Hogan!

I don't blame him, they was trying to rob him in France after that 1st Fight. The Score Cards took like 15-20 Minutes to come in :nonono: Stay in America! He can always get a shot at J Rock for…

Is this the same promoter he had to sue to get paid the first time? If so, how is this promoter still allowed to bid?

Can't blame him on this one. He's had nothing but drama with these guys over there. But why isn't the WBA stepping in instead he has to vacate that makes no sense to me. If they ain't deposit the money…

If the French promoter didn't deposit the money in escrow then that would be grounds for calling for a new purse bid. There would be no need for Castano to drop the belt.