Carlos Cuadras: I Kicked My Addictions, I'll Never Return To Them

After dropping a drugs problem, with the support of the World Boxing Council, and undergoing rehab, combined with  his admirable determination to pull himself together, Carlos Cuardas is ready to knuckle down to boxing, with the avowed aim of becoming WBC bantamweight champion.

The former WBC super flyweight champion explained:  "I am here, in front of all of you, together with my dear President Don Mauricio, to tell you that  I am a new man who managed to get out of the hell of addictions, a world I should never have known and to which, I assure you I will never return.

"I do not pretend to justify myself, much less to blame anyone, I know that I am the only one responsible for choosing a wrong path. The depression of my last few fights led me to make wrong decisions, and  I hit rock bottom. I saw myself lost, I was devastated after not being able to be a worthy champion of the world, like those idols for which I undertook this quest.

"Those were difficult times. A life lesson made me learn, my rehabilitation was not only physical but also spiritual. Today I value my family even more. I value my career as a boxer, the one that thrilled the public and that always put on high the name of Mexico.

"Today a new man is in front of you. A more mature dedicated and stronger man than ever. I am willing myself to return to the path of success, I want to be world champion again and turn my experience into something positive, to be an example." 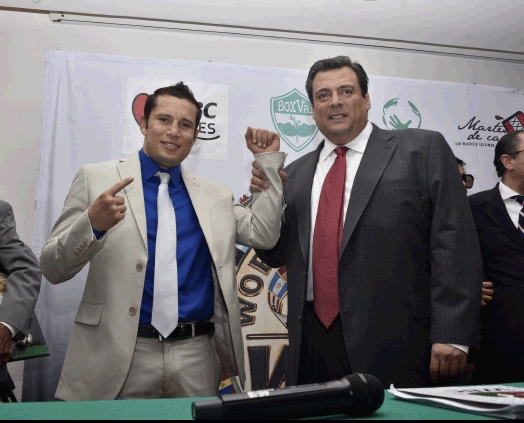 Carlos explained that in the near future and following the protocols established by the WBC, he will fight in the bantamweight division, because he recognized that he doesn’t feel healthy in making the super flyweight category. He even asked the WBC leader for a chance to fight for the world title .

In whole hearted support World  Boxing Council President Mauricio Sulaiman did not rule out giving Carlos that opportunity; however, he was emphatic in saying that Cuadras must comply with certain protocols to ensure that his return to the ring is totally safe for him.

He also recognized that Cuadras has been and will always be one of the boxers most loved by the WBC and that today is a very important day, because as he said, it takes a lot of courage to recognize an addiction.but  it is even more necessary to further progress by acknowledging it publicly.

Mauricio then said to Cuadras: "Yesterday, today and tomorrow, the WBC will always be with you."

im happy for him and like to watch him fight. but looking back to his lost, i just wonder how he get so many chance. meanwhile look like arroyo didnt get the same treat. not until estrada out of the…

Am I the only one who thinks that this addiction thing was just a cover up to roid use? This ol pimple back cheater was popping peds like chicklets and refused to take the test. Then pretended to be a…

[QUOTE=1hourRun;18816171]Oh sh*t! I see Carlos Cuadras vs. Luis Nery in a eliminator for the WBC bantamweight title now that Caudras is headed to 118. I find the possibility of two VADA failures ( One confirmed cheat) competing for a shot…

[QUOTE=FinitoxDinamita;18816218]Kicked the habit this quick? Bullshtter[/QUOTE] Exactly like I said, too early to say he will never return to them. It's not been a month I think. Even rehab wasnt actually that long. I thought he left.