Cano in Line For a Big Fight, Linares Heading Back To 135

Mexican junior welterweight puncher Pablo Cesar Cano will be looking for a big opportunity in 2019, after pulling off the biggest surprise outcome of last weekend.

He came in as a huge underdog, but he needed only a single round to scored a first round knockout of three division champion Jorge Linares in New York. The contest was a WBC final eliminator.

Roberto Diaz, the matchmaker for Golden Boy Promotions, reported that Cano will have the opportunity that he has earned with his actions in the ring, while Linares is planning to return to 135 pounds, because at 140 he felt physically disadvantaged. 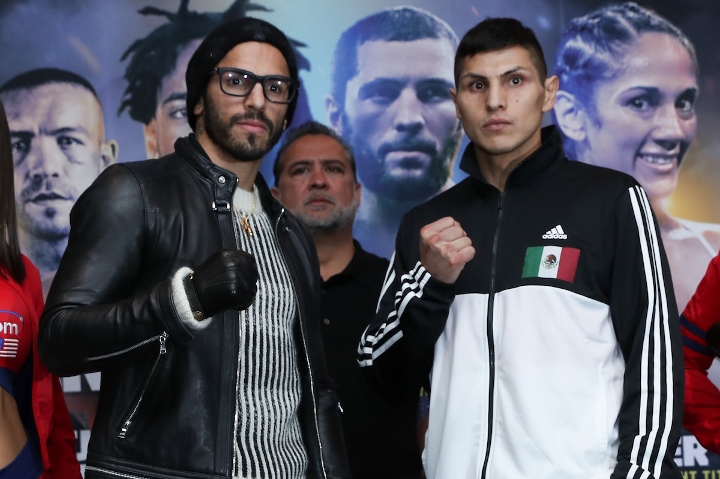 Diaz was surprised with the early ending, but he wasn't surprised that Cano pulled off the upset win.

"We knew it was a reserved forecast for the fight, that Linares was a favorite but we never thought that Cano was the big underdog that many experts said. Obviously we were surprised that it ended so soon but this is the kind of fights that Golden Boy will have in the year," said Diaz to ESPN Deportes.

"For Cano obviously we talked to him last night, and we want to get him the big fight. If the World Boxing Council gives us permission to go straight for the title he will be ready, and if not, we will look for a big fight for him and maybe there will be a chance in May. For now he will rest for a week and then return to the gym."

The Mexican matchmaker highlighted the experience that Cano has accumulated by sharing the ring with fighters like Erik Morales, Shane Mosley and Paulie Malignaggi, in addition to the good fight he gave to Ruslan Madiev in September.

And regarding Linares, he is heading back down in weight commented Diaz.

"Obviously we knew there was risk, he knew it and prepared himself thoroughly, but he told me that he felt very physically disadvantaged, that he plans to return to the 135 where there are good fights and where he will surely have new opportunities because he is a committed fighter and experienced," Linares said.

[QUOTE=whoseyourdaddy;19453788]I wanted Cano to face Broner, back when he beat the shït out of Pauli Malignnagi but got robbed, am sure Cano would've beaten the Can-man really bad. But be robbed again.[/QUOTE] I actually like that idea. And after Saturday…

[QUOTE=SteveAnitaSmith;19452812]Cano walks down Algieri, hopefully it gets made then a payday with Ramirez or Hooker[/QUOTE] I agree that he gets to Algieri. Hopefully his management does right by him and continues on his building momentum. He beat that undefeated prospect…

Is Cano with Zanfer? I wouldn't mind seeing Cano-Hooker. Would be a fun fight. Or Saucedo, for that matter. :boxing:

[QUOTE=bulldognyc;19452632]Cano would be a good match for Algieri, Virgil Ortiz or Luke Campbell right now. All interesting fights.[/QUOTE] I wanted Cano to face Broner, back when he beat the shït out of Pauli Malignnagi but got robbed, am sure Cano…