Middleweight world champion Canelo Alvarez, stymied by his inability to get a fight lined up due to contractual issues with his promoter and broadcast partner, is taking his fight outside the boxing ring.

In the 24-page lawsuit, a copy of which was obtained by BoxingScene.com, Mexico’s Alvarez is suing for, among other reasons, breach of contract, intentional interference with a contract, negligent interference with a contract, fraud and breach of fiduciary duty related to the five-year, 11-fight deal worth a then-athlete record $365 million Alvarez signed with streaming service DAZN in the early morning hours of Oct. 17, 2018.

Under that deal, Alvarez was due to fight twice per year, on the Mexican holiday weekends in May and September, for $35 million minimum guarantees from the $40 million DAZN would pay Golden Boy for each fight, other than the first bout of the deal against Rocky Fielding in December 2018 for which Alvarez received $15 million.

“Despite Alvarez’ successes, both DAZN and Golden Boy have broken the promises they made to each other, Alvarez, and boxing fans,” the lawsuit said. “In doing so Defendants have breached their respective contracts and caused Alvarez damages of -- at least -- $280 million.”

Under the deal with DAZN, the 30-year-old Alvarez (53-1-2, 36 KOs) has defeated Fielding to win a secondary super middleweight title, returned to middleweight to outpoint Daniel Jacobs to unify 160-pound belts and then moved up two divisions and knocked out Sergey Kovalev in the 11th round of his most recent fight last November to win a light heavyweight world title.

Since then, between the coronavirus pandemic and issues coming to agreement on an opponent for a fight penciled in for this fall, Alvarez has no fight lined up and he is not happy about it.

“I’m the pound-for-pound No. 1 in the world. I’m not scared of any opponent in the ring, and I’m not going to let failures of my broadcaster or promoters keep me out of the ring,” Alvarez said in a statement to BoxingScene. “I filed the lawsuit so I can get back to boxing and give my fans the show they deserve.”

DAZN has wanted Alvarez to fight fellow middleweight star Gennadiy Golovkin, whom it also has under contract, for a third time after their two mega-pay-per-view fights ended in a draw and a disputed Alvarez majority decision win. The trilogy match looms as one of boxing’s biggest fights and DAZN had hoped to have it last year rather than the Kovalev fight.

Earlier this year, according to sources, the sides made a deal for the bout to take place this month, following Alvarez facing super middleweight titlist Billy Saunders this past May and Golovkin facing his mandatory middleweight challenger Kamil Szeremeta in the spring.

But when the coronavirus pandemic shut the sports world down neither fight was formally announced and there was no boxing for several months. 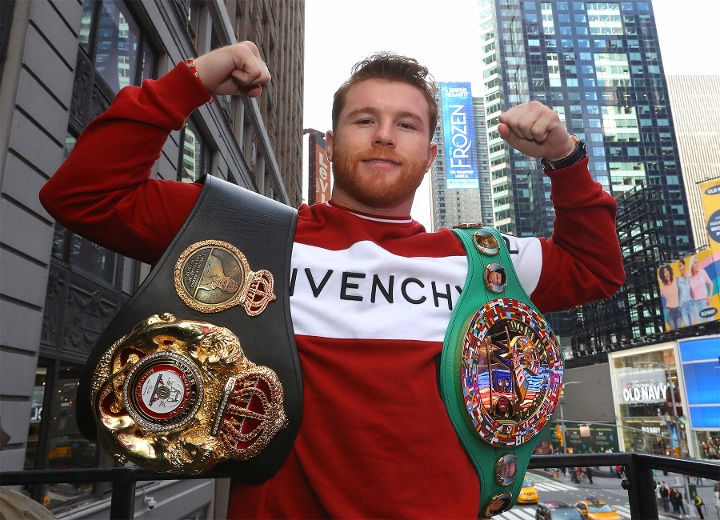 With the sport returning in June, discussions had already begun for Alvarez’s next fight but DAZN, according to sources, wanted to cut Alvarez’s money from $35 million to less than half for him to fight either of the non-Golovkin opponents it approved: super middleweight titleholders Saunders and Callum Smith.

According to the suit, “Despite repeated promises that an alternative offer was imminent, DAZN failed to make a proposal to either Golden Boy Promotions or Alvarez for several months. When Golden Boy Promotions and Alvarez proposed opponents, DAZN refused to confirm that it was prepared to broadcast Alvarez’ September 2020 bout or that it would pay the contracted $40 million license fee.

“On June 24, 2020 – approximately 10 weeks before Alvarez’ expected September bout, date and the time when Alvarez would need to begin training camp for a bout in mid-September 2020 – Alvarez’ counsel wrote to Golden Boy Promotions and DAZN to confirm that Alvarez was prepared to face multiple potential world-class opponents, but that DAZN and Golden Boy Promotions needed to affirm their commitments so that the bout could be finalized, promoted, and his training could commence.”

According to the suit, DAZN said it would not pay the required license fee, and provided “a series of excuses, including, but not limited to, the fact that Alvarez had not fought Mr. Golovkin in 2019 and that Golden Boy Promotions had not put forth a plan for a second Alvarez fight in 2020.”

Multiple sources told BoxingScene that Alvarez agreed to take less than his guarantee but not as much as DAZN wanted to reduce it to. Alvarez, who is willing to box without a crowd, was also looking at less revenue on top of a reduced license fee because he would lose out on his share of the live gate because no fans are allowed to attend fights yet due to the coronavirus.

The lawsuit said that DAZN did try to cut the license fee.

“After extended discussions between the parties, DAZN offered to pay Alvarez and Golden Boy Promotions a fraction of the contracted $40 million license fee in cash and some DAZN stock in advance of a potential IPO,” the suit said. “However, the entire value of the package – for a bout against another World Champion – was substantially less than Alvarez’ contractual guarantee.

“Given that DAZN had made it clear that it would not honor its contract, throughout the spring and summer of 2020, Alvarez repeatedly asked Golden Boy Promotions to explore alternative broadcast options for a fall 2020 bout. Although Golden Boy Promotions reported that it was talking to various broadcasters, it failed to put forth a single alternative plan by which it would pay Alvarez the $35 million it had promised him for each of his fights. Alvarez has fought the first three of his eleven fights under the Alvarez and DAZN Contracts. He is owed remaining guaranteed payments of $280 million.”

Golden Boy said the issue is not between the promotional company and Alvarez, but rather between Alvarez and DAZN.

“They’re the ones refusing to honor the contract by not approving the outstanding opponents we have presented to them and by refusing to pay the contractually required amount,” Golden Boy spokesman Stefan Friedman told BoxingScene. “Even though our contract specifically gives Golden Boy the right to wait until the pandemic is over and fans can return, in the best interests of boxing, Golden Boy is doing everything it can to make great fights happen. We remain ready, willing and able to make a fight for Canelo as soon as possible.”

DAZN representatives could not immediately be reached for comment.

According to the lawsuit, other than Fielding, the contract did not require Alvarez to face “any specific opponent. Instead, it specified that Alvarez’ opponents ‘be mutually selected’” by Alvarez, Golden Boy and DAZN and that approval “not to be unreasonably withheld.”

“Nobody from Golden Boy ever promised anyone that Canelo would fight any specified opponent,” Friedman said. “We simply agreed to put on the kind of premier, history-making fights we worked on together in 2019.”

In the suit, Alvarez disagreed with that assertion.

“The Alvarez Contract did not require Alvarez to select Mr. Golovkin as his opponent in 2019, or at any time thereafter,” the suit said. “In fact, the Alvarez Contract required that a bout with Mr. Golovkin would require additional guaranteed payment in excess of $25 million, to be separately negotiated. … Alvarez was not told that Golden Boy Promotions had already entered into an agreement with DAZN that gave DAZN a role in approving his future opponents. Neither did Golden Boy Promotions disclose that they had represented to DAZN that Alvarez would have a bout with Mr. Golovkin in 2019.”

Further, the suit alleges that Golden Boy “intentionally failed to disclose that they had made representations and/or promises to DAZN that exceeded or were inconsistent with the terms of the Alvarez Contract. … Alvarez is informed and believes that DAZN is now using the previously undisclosed representations and/or promises of Golden Boy Promotions … as excuses for its failure to approve of and pay for Alvarez bouts in the fall 2020 and beyond.”