Canelo: It's Good That Golovkin is My Fan, Comes To See Me

Canelo won a close twelve round majority decision over Golovkin in September 2018, at the same Las Vegas venue. 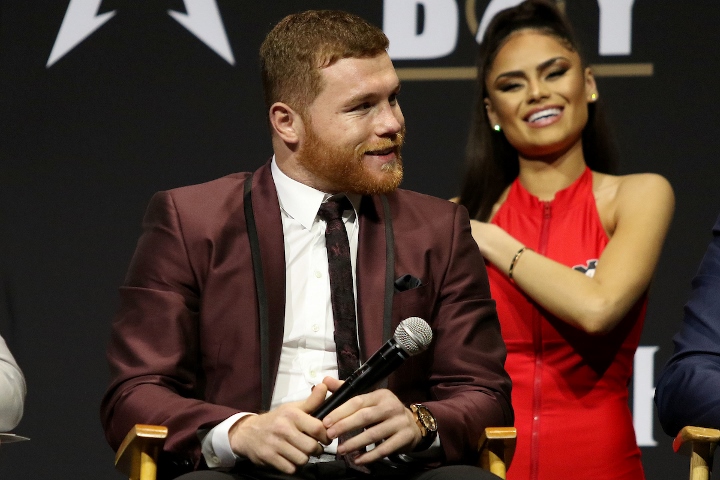 After the contest was over this weekend, Golovkin was highly critical of the bout.

He said "it was boring" and "lacked drama" and it was "nothing special" to him.

But Canelo said that he's fond of Golovkin for being at the card.

"It 's good that he comes to see me, it's good that he's my fan. I'm grateful to have won, there's more work to do and we're going to get even stronger," Canelo said.

Golovkin is back in the ring on June 8th, when he faces Steve Rolls at Madison Square Garden in New York City.

DAZN is very interested in seeing Canelo face Golovkin in a trilogy fight in the fall.

But Canelo and his handlers have other ideas. They prefer to face a world champion in September, with the WBO middleweight champ as their main target.

Demetrius Andrade is the current holder of the WBO world title, and next month he faces Maciej Sucleki in a voluntary defense.

If they are unable to secure a fight with the WBO champion, Canelo will potentially return to super middleweight for a fight with WBA champion Callum Smith.

Canelo said that he's open to the idea of a trilogy fight with Golovkin, if the fans demand it, and feels confident in his ability to "beat him again."

[QUOTE=KillaMane26;19724927]Yea what's up with G not speaking English recenlty lol[/QUOTE] when Canelo beat the Mexican out of G..... it looks like he beat the English out of him as well

Great reply’s so far lmfao. Canelo got him with that comment

[QUOTE=champion4ever;19724911]Gennady comes to your fights Canelo because he wants a piece of your ass! He has a very large score to settle with you in the boxing ring. Which is why he signed with DAZN. So don't duck him! Fight…