NEW YORK – Numbers were the primary focus before, during and after the Canelo Alvarez-Rocky Fielding press conference Wednesday in The Theater at Madison Square Garden.

The historic five-year, 11-fight, $365 million deal Alvarez and Golden Boy Promotions reached with DAZN attracted most of the attention as everyone took notice of the new streaming service’s most significant signing to date. One-hundred, sixty-eight – the weight at which Alvarez will fight for the first time when he faces Fielding on December 15 – was mentioned numerous times, too.

The number three, as in Alvarez’s third fight against Gennady Golovkin, didn’t come up nearly as much. Alvarez assured reporters as he left the venue, however, that he remains interested in boxing Golovkin a third time.

Making a third Alvarez-Golovkin fight could become more complicated than putting together their rematch. Their second fight nearly fell apart over money because Golovkin wouldn’t accept anything less than a 55-45 split once Alvarez’s six-month suspension for using clenbuterol caused a four-month postponement.

Golovkin was willing to walk away from what was the biggest payday of his 12-year pro career. At least then, though, Golovkin and Alvarez both had exclusive contracts to fight either live on HBO or on HBO Pay-Per-View.

Now that HBO has abandoned boxing and Alvarez (50-1-2, 34 KOs) has signed to perform on a streaming service, Golovkin seemingly must join him if the former champion from Kazakhstan wants a chance to avenge his 12-round, majority-decision defeat to Alvarez on September 15 at T-Mobile Arena in Las Vegas. Eddie Hearn, the primary promoter for DAZN, said Wednesday that Golovkin (38-1-1, 34 KOs) will need to sign with DAZN to get that third crack at Alvarez.

“The carrot from [Golden Boy to Golovkin] will be, ‘You sign with us, we’ll give you the Canelo fight,’ ” Hearn said after the press conference Wednesday. “We can’t do that. You know, we can say to a heavyweight, ‘Sign with us, we’ll give you the [Anthony] Joshua fight.’ But I think [Golovkin] has no choice but to go on DAZN. No choice. The only fight out there for him that’s gonna generate crazy money is the Canelo fight.” 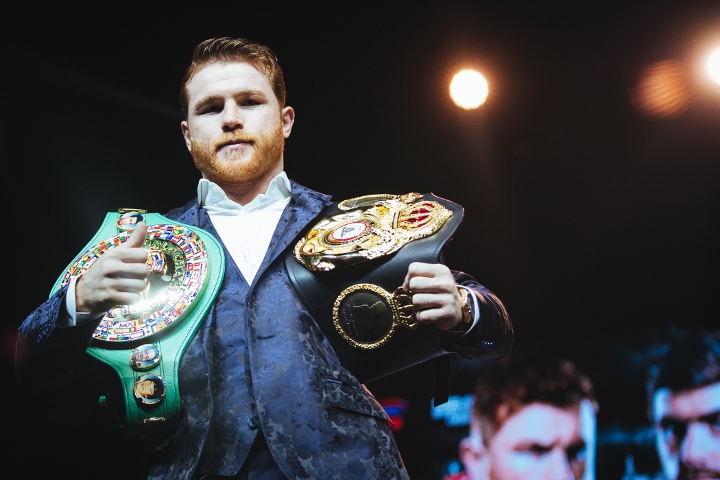 It’d be better for Hearn, if not DAZN, if Golovkin doesn’t land a third fight against Alvarez. That would open up opportunities for formidable middleweights his company promotes – Demetrius Andrade and Daniel Jacobs – to secure lucrative shots at Alvarez if they can win their respective fights against Walter Kautondokwa and Sergiy Derevyanchenko.

Andrade (25-0, 16 KOs), of Providence, Rhode Island, will meet Namibia’s Kautondokwa (17-0, 16 KOs) for the vacant WBO middleweight title in a DAZN main event Saturday night at TD Garden in Boston. Brooklyn’s Jacobs (34-2, 29 KOs) and Ukraine’s Derevyanchenko (12-0, 10 KOs) will square off for the unclaimed IBF middleweight title October 27 in a fight HBO will air from The Theater at Madison Square Garden.

Potential Alvarez-Andrade and Alvarez-Jacobs bouts are predicated on Alvarez moving back down from super middleweight to middleweight even if he defeats England’s Fielding (27-1, 15 KOs) to technically become a world champion in a third weight class.

Former IBF champion David Lemieux (40-4, 34 KOs), another Golden Boy/DAZN fighter, also is a logical candidate to fight Alvarez on May 4 if Alvarez defeats Fielding and returns to middleweight for his following fight. That could force Golovkin to wait until next September to battle Alvarez a third time, but arranging Alvarez-Golovkin III would be worthwhile for everyone involved, particularly financially.

Their 12-round rematch, a more entertaining encounter than their first fight, reportedly produced 1.1 million pay-per-view buys. That’s roughly 200,000 less buys than generated by their 12-round draw in September 2017, yet still successful.

A third bout between them would be highly anticipated as well and could help DAZN attract the number of subscribers its executive chairman, former ESPN president John Skipper, had in mind when he offered Alvarez and Golden Boy Promotions an unprecedented package to leave pay-per-view behind for DAZN.

Golovkin has a lucrative option while he waits to land a third fight against Alvarez. If Japan’s Ryota Murata makes a successful defense of his WBA world middleweight title against Dallas’ Rob Brant on Saturday night in Las Vegas (ESPN), a Golovkin-Murata match might be next.

Tom Loeffler, Golovkin’s promoter, and Bob Arum, Murata’s co-promoter, have discussed the possibility of Golovkin traveling to Japan to meet Murata in what would be a huge fight in Murata’s homeland. Arum repeatedly has told BoxingScene.com that a Golovkin-Murata match could sell out the 55,000-seat Tokyo Dome, where James “Buster” Douglas recorded his legendary upset of Mike Tyson in February 1990.

Loeffler is scheduled to attend the card headlined by Murata (14-1, 11 KOs) and Brant (23-1, 16 KOs) at Park Theater. A Murata victory could lead Loeffler, Arum and Akihiko Honda, Murata’s other co-promoter, to finalizing a deal for Golovkin to try to bounce back from his first professional defeat against Murata.

Arum – whose company, Top Rank Inc., works exclusively with ESPN – would prefer to sign Golovkin to more than a one-fight agreement to box on ESPN or ESPN+. Conversely, Loeffler wants to work on a bout-by-bout basis with whichever network or streaming service Golovkin chooses because it’ll give Golovkin the flexibility he needs to secure lucrative fights in the twilight of his career.

“Mr. Honda of Teiken Promotions has always stated to me that his dream is to have Murata face Golovkin in the Tokyo Dome,” Arum told BoxingScene.com on Wednesday, “and he feels it will be an even bigger attraction than Mike Tyson years ago with Buster Douglas. I can’t talk for Golovkin. Only Loeffler, who will be coming to the fight, can do that.

“Golovkin may decide to go to 168 and there are plenty of guys – [IBF champ Jose] Uzcategui, [WBO champ] Gilberto Ramirez. So Golovkin isn’t gonna have to worry about opposition. Right now, if Murata wins a very tough fight versus Brant, I think it will be very possible that the next fight for Golovkin and the next fight for Murata will be against each other sometime next year.”

stop the crybaby stuff you guys the better man won

[QUOTE=SpeedForce;19213074]He got a slap on the wrist, was allowed to fight again in under a year. I dont think he took any backlash at all. Golden Boy sheltered their investment and he hasn't even faced any real scrutiny. And how…

[QUOTE=iamboxing;19206265]Well, Canelo took the backlash, swallowed the hate and came back clean to beat Golovkin at his own game. He redeemed himself and won a lot of non-Mexican fans in the process. How can you still hate him if he…

[QUOTE=Jab jab boom;19211305]you're writing the same nonsense over and over and we all know it's bulls***t. Face the facts that Canelo *****ed out and waited the fight out for 2 yrs. He wasn't trying to risk anything which is why…