Canelo: If Golovkin Trilogy Represents Business - Why Not?

Canelo Alvarez Alvarez is open to the idea of a trilogy fight with Gennady Golovkin - if it makes financial sense.

DAZN, who signed Canelo to an eleven fight deal in 2018, had pushed a for a Golovkin fight in September - but the Mexican superstar rejected that idea and instead made a decision to move up by two weight classes to light heavyweight, to pursue a fight with WBO world champion Sergey Kovalev.

Canelo collided with Kovalev on Saturday night and scored a sensational eleventh round knockout over the much bigger man. 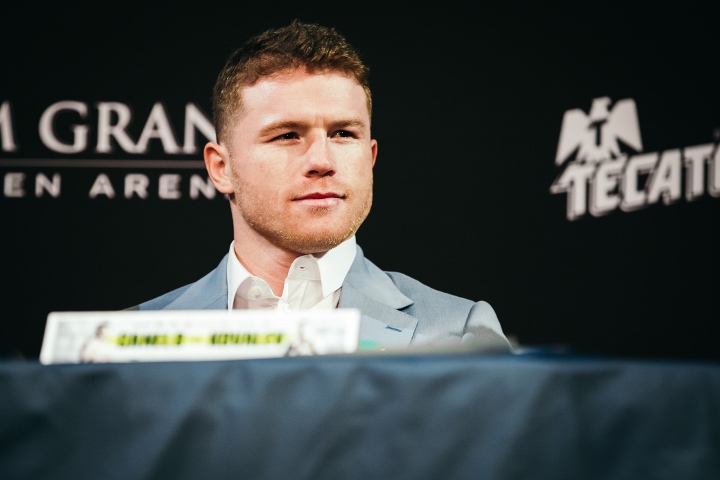 When they met in 2017, Canelo and Golovkin fought to a controversial twelve round split draw.

In their 2018 rematch, Canelo won a close twelve round majority decision to hand Golovkin his first career defeat.

If the money makes sense, Canelo is open to a third battle - although he doesn't see GGG as a threat.

Another question is the weight class for a third encounter.

There are many observers who doubt Canelo will return to the middleweight division - as he appeared to be pretty bulked up for the fight with Kovalev.

Golovkin currently holds the IBF's title at 160-pounds, but he's been open to the idea of going to super middleweight for the right fight.

Canelo's next ring return will likely take place in the month of May, during Cinco De Mayo weekend.

[QUOTE=Curt Henning;20171148]these guys just dont get it....canelo smacked golovkin around in the style of fight golovkin begged for...hes older and just been in a good war.....he cant do better....golovkin himself knows this he just likes the fat check [B][SIZE="3"]the same…

these guys just dont get it....canelo smacked golovkin around in the style of fight golovkin begged for...hes older and just been in a good war.....he cant do better....golovkin himself knows this he just likes the fat check the same idiots…

[QUOTE=jimisawesome;20168803]‘(b) PROMOTIONAL RIGHTS UNDER MANDATORY BOUT CONTRACTS- No boxing service provider may require a boxer to grant any future promotional rights as a requirement of competing in a professional boxing match that is a mandatory bout under the rules of…

[QUOTE=ShoulderRoll;20164146]Do you want Canelo to fight Golovkin or not? Canelo doesn't need him and is glad to turn the page but the press and DAZN keep pestering him about it.[/QUOTE] You didn’t mention the actual boxing fans who know about…

[QUOTE=strykr619;20168799]You know this how? You actually seen the contract? Guess what no company with that kind financial backing will sign a contract that doesn't ALLOW them to dictate fight terms. Canelo has been able to avoid GGG because their were…