Canelo: I Plan To Officially Weigh 175 For Kovalev Fight

Saul ‘Canelo’ Alvarez still isn’t sure whether his next fight will be a one-and-done affair in a new weight division.

What he does know, however, is that he’s going to fully play the part of a true light heavyweight.

“I will be on weight, I plan to (officially) weigh 175 pounds,” Mexico’s Alvarez (52-1-2, 35KOs) insisted during a media conference call of the mark he plans to hit for his Nov. 2 challenge of three-time and reigning light heavyweight titlist Sergey Kovalev (34-3-1, 29KOs). “That is what we’ve been working on in training camp.” 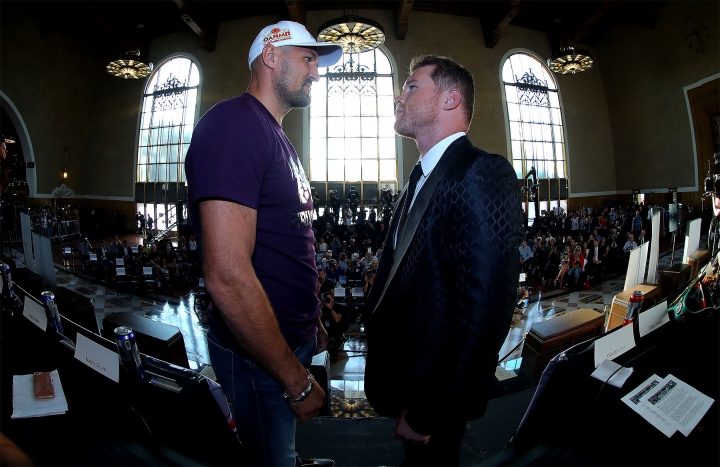 The bout—which will stream live on DAZN from the MGM Grand Garden Arena in Las Vegas, Nevada—will mark just the third time in his career where he’s fought above the 160-pound middleweight limit, all coming within the last 30 months. His May ’17 shutout of countryman Julio Cesar Chavez Jr. was fought at a specific 164.5 pound catchweight—with both boxers weighing 164 pounds for the event—while he weighed a career heaviest 167.25 pounds for his three-round destruction of Rocky Fielding for a secondary super middleweight title last December.

Following each fight, Alvarez returned to the middleweight division. His win over Chavez Jr. was followed by his two-fight middleweight championship set with Gennadiy Golovkin, weighing 160 pounds for their 12-round draw in Sept. 2017 and 159.5 pounds in his majority decision win last September. Less than five months after his super middleweight heist, Alvarez checked in at 159.5 pounds ahead of his unanimous decision win over Daniel Jacobs in their three belt unification clash this past May.

The shifting in weight comes in stark contrast to that of Russia’s Kovalev, a career long light heavyweight whose only bouts above the divisional limit came earlier in his career which is a common practice in non-title fights. He’s weighed in the range of 173-175 pounds for each of his 21 fights and—barring a rare scale snafu, as he’s never before missed weight—will do the same on Nov. 2 The event will also mark the 17th straight title fight for the 36-year old, who enjoys a four-inch height advantage in addition to being a naturally bigger athlete.

Still, the thought of weakening Kovalev by means of demanding a catchweight never came into play, nor did anyone on Alvarez’s team even bring up the subject.

“We did not, at all,” insists Oscar de la Hoya, founder and chairman of Golden Boy Promotions, himself a Hall of Fame former six-division titlist. “It really shows Canelo’s character and the mark he wants to leave on the sport. He wants to make history.”

Even in uncharted territory, Alvarez is going about his business as if the new weight is his permanent home.

“I’ve been doing more weightlifting,” Alvarez notes in the differences between this camp and others, including his one-time stop at super middleweight just two fights ago. “We are not lifting heavy, just doing more reps. We are eating more protein, more carbs and putting on weight the right way.”

[QUOTE=IceTrayDaGang;20116400]walk around and fighting is 2 different thangs tho... a fat mofo can walk around for 20 min and not get tired, but put his azz in a race and the mofo will crumble in 2 minutes.[/QUOTE] Yeah no doubt…

canelo is gonna sacrifice all the rds to try and ko serg around 8-10. if that doesnt happen the judges will save him with a draw wart roidnelo

[QUOTE=Boksfan;20115915]You lying piece of shyt, everybody knows there is a rehydration clause in the contract. You can lie you little bytch but boxing fans know Clenelo Alvaroid is a cheat :dance:[/QUOTE] You lying worthless piece of shet! Send a link…

[QUOTE=icha;20114527]i dont like that, canelo needs his speed more than his power, also he will affect his stamina...[/QUOTE] I think you are right. Canelo and his team seem to be sacrificing speed for strength. It might turn out to be…