Canelo: Failed Drug Tests Were My Fault - NOT My Team!

Mexican superstar Canelo Alvarez is taking the full blame for a pair of failed from February.

Canelo came up positive for the banned substance clenbuterol.

He was suspended by the Nevada State Athletic Commission for six months - and the situation forced him to withdraw from a scheduled rematch with Gennady Golovkin for May 5th. 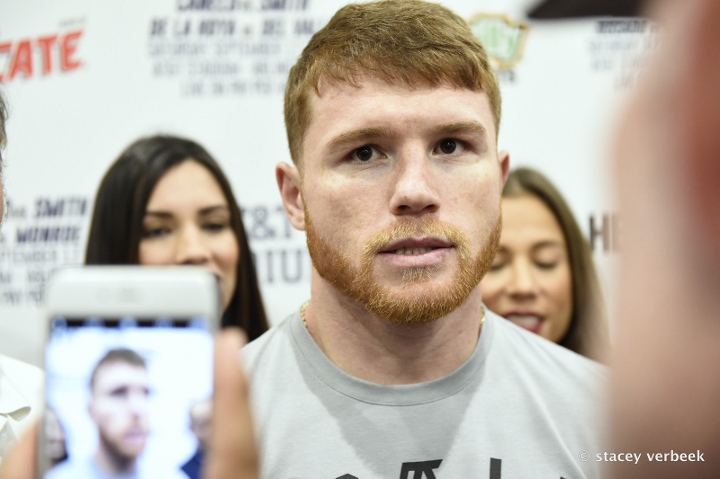 The rematch with Golovkin is now scheduled for September 15th at the T-Mobile Arena in Las Vegas.

Canelo's handlers have taken a lot of heat for their boxer testing positive - but he accepts sole responsibility for what happened.

Canelo has maintained that his positive tests were a direct result of ingesting contaminated meat during his training camp in Mexico.

For the upcoming rematch, Canelo is now being tested by VADA on a regular basis and he stopped eating meat.

"I do not want to involve anyone else, really this was a mistake that I made by not reading about this, about this issue, about the serious issue that Mexico has with the meat," Canelo told ESPN Deportes.

[QUOTE=Boxing Scene;18963211]Yeah just like the first fight where he lost 8 rounds to 4, ran the whole time and fought 1 min of each round. Great prediction. Send some video since you're in his training camp. Would like to see…

[QUOTE=mlac;18962607]is it far fetched to think golovkin and/or parts of his team targeted Canelo in an operation to taint his meat in order to gain a more favorable purse??[/QUOTE] No, i think that's probably what happened. Golovkin trains with a…

Let's hope for the good of boxing that Golovkin knocks him out this time.

[QUOTE=Squ□redCircle34;18964332]I guess you don't have good attention to details ability otherwise you would know that so called "best shot " was rolled with by ggg! Ggg rolled with it which took some of the power off of it, and he…

You got busted in February, it's damned near August and [B]now [/B]you [I]somewhat[/I] accept responsibility? FOH, Mexican Bozo.