No one can blame Canelo Alvarez for wanting the drug thing to go away.

Alvarez tested positive for the banned substance clenbuterol in February, a few months before his scheduled rematch with rival Gennady Golovkin. The Mexican star blamed two failed tests on tainted meat but he was suspended for six months nonetheless, which resulted in the cancelation of the fight.

Alvarez has since enrolled in the year-round Voluntary Anti-Doping Association program and agreed to fight Golovkin on September 15.

“I’ve already spoken about what has happened,” said Alvarez, referring to an ESPN.com interview he hoped would put the incident behind him. “I want to turn the page on this and focus on this big fight on September 15. I want to move forward. The people know. I gave the explanation I needed to give at the moment I needed to give it. I’m 100 percent focused on this upcoming fight and nothing more.”

The reality is that the drug thing will never go away, at least not entirely. Once fighters are busted for performance-enhancing drugs – regardless of the circumstances – it becomes part of their legacy.

Alvarez gave a plausible explanation for the failed tests, claiming he was ignorant of the risks of eating beef in his country. Ranchers in Mexico have used clenbuterol to produce lean meat.

Some people believe Alvarez, whose samples reportedly were in a range consistent with tainted meat. Everyone is capable of being careless, right? And remember: He had never failed a drug test before. 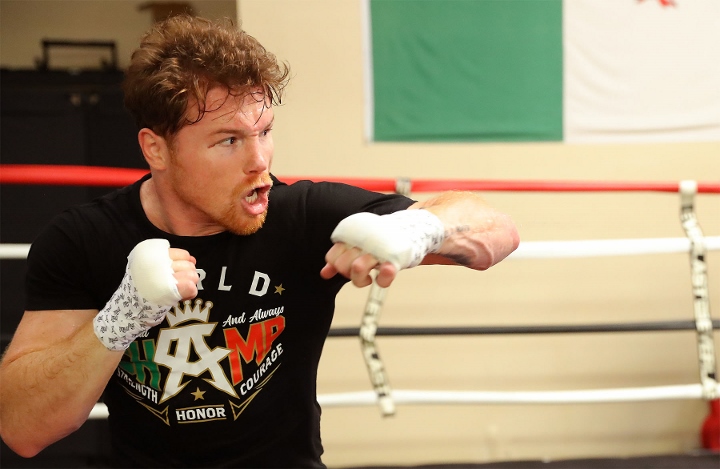 Some people don’t believe him. They might say, “C’mon, everyone knows about the clenbuterol problem.” It had been in the news for some time because of previous incidents. Most notably, five members of the Mexican national soccer team tested positive for the substance and were banned from playing in a major tournament 2011. Plus, other boxers and mixed martial artists have been found to have clenbuterol in their bodies.

Of course, we’ll never know with certainty whether Alvarez knew what he was doing. That’s the problem: We’ll always wonder.

Alvarez has already taken steps to repair the damage to his reputation. He enrolled in the stringent VADA drug-testing program, which made his rematch with Triple-G possible. And he has taken responsibility for actions, blaming only himself. “It was my mistake,” he said, “and I will not repeat it.”

That’s crucial. Alvarez must never, ever test positive for a banned substance again. If he does, there will be no turning back. His reputation will have been shattered forever.

He said he is pulling out all stops to be certain it doesn’t happen again. “After what happened to me,” he said, “I've taken a lot of precautions. Really, too many precautions, I think extreme.” I believe that.

He must do a few more things to repair his image.

One, he must recognize that he will be asked questions about performance-enhancing drugs regardless of his interview with ESPN.com. It remains part of his story. He should handle such inquiries with as much patience and class as possible, which shouldn’t be difficult for him. He has always handled the media deftly.

And, two, he must win fights. Nothing will do more to clean up his stained reputation than performing at the level we expect of him while he is in the VADA program.

A good fight with which to start would be the one on September 15. Imagine if he beats Golovkin – who has openly called him a drug cheat – in the rematch when we can presume that he’s a clean fighter. Alvarez could then say with legitimacy, “Drug cheat, huh? I don’t need drugs to win big fights?”

Of course, a loss would fuel his critics. If Alvarez falls to Golovkin – particularly if he’s blown out – those who question his explanation for his failed tests and wonder (without evidence) whether he has used PEDs in the past will pounce. They’ll proclaim with glee, “Told ya so. Without drugs, he’s not the same fighter.”

In the end, that’s out of Alvarez’s control. He can only do so much. He can stay clean, he can be as transparent as possible when it comes to testing, he can work harder than he ever has before in the gym and he can fight his heart out every time he steps into the ring going forward.

If he does those things – regardless of what happens in the rematch with Golovkin – the clenbuterol episode will become a faint scar and he’ll be judged primarily by his many accomplishments.

[QUOTE=HandsofIron;19069211]Come on bruh, Canelo was the one who got caught not once but wait for it..........twice, TWICE! It makes Canelo and boxing as a whole look turrible.[/QUOTE] Yeah, but what was found were trace amounts consistent with eating tainted meat.…

[QUOTE=ShoulderRoll;19069198]How do we know Golovkin is not on PEDs?[/QUOTE] Come on bruh, Canelo was the one who got caught not once but wait for it..........twice, TWICE! It makes Canelo and boxing as a whole look turrible.

[QUOTE=HandsofIron;19069196]Canelo is super, filthy rich, he's set for life. Why not take that chance again? He's got nothing to lose; it's not like he'll go to jail if he gets caught again, he'll just be banned. There's just too much…

[QUOTE=ShoulderRoll;19069180]Year-round VADA is the highest standard of testing available at the moment. You can't ask him to do more than that.[/QUOTE] Canelo is super, filthy rich, he's set for life. Why not take that chance again? He's got nothing to…

[QUOTE=HandsofIron;19069174]Tests can be beaten, e.g. Lance Armstrong doping case, blood transfusions etc..[/QUOTE] Year-round VADA is the highest standard of testing available at the moment. You can't ask him to do more than that.