Put aside the title on the line. As long as Callum Smith is active in the super middleweight division, he’s the WBA titlist worth paying attention to.

It’s still the debut of Saul Alvarez in a third weight class and he’s fighting a consensus top ten fighter in the class. The road for Fielding to that distinction was traveled pretty much in a night. In August, Fielding went on the road to Germany and summoned the best performance of his career with a fifth round stoppage of undefeated Tyron Zeuge.

It was Fielding’s sixth straight win since his lone loss, a first round stoppage at the hands of Smith in 2015. Now the UK native travels to the Mecca of boxing, Madison Square Garden, to face the biggest money draw in the sport right now.

Can Fielding be a real life Rocky? 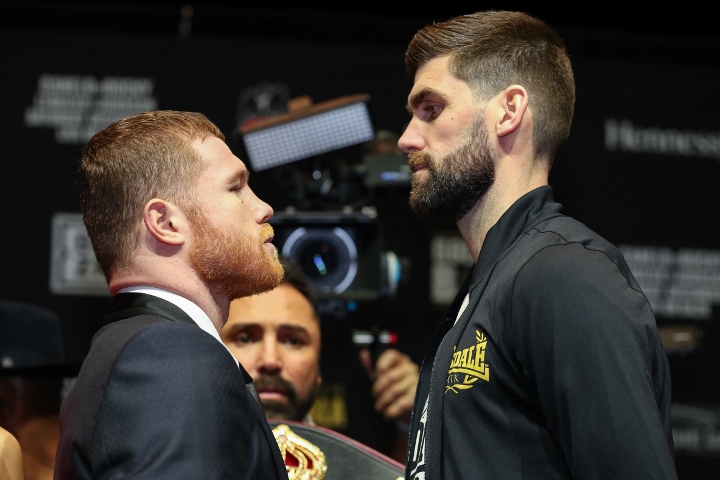 The Case for Alvarez: Alvarez has several advantages to the naked eye: he’s had heavier hands at Jr. middleweight and middleweight so one can guess at some power edge here. Alvarez is also quicker and employs excellent head movement giving him the defensive edge as well. The biggest advantage may be that Alvarez has honed those tools against a far higher level of opposition. Outside the lopsided loss to Mayweather, he’s run just enough ahead of the crowd to defeat men like Austin Trout, Erislandy Lara and, in his last fight, Gennady Golovkin. If there is a question, it will be how Alvarez handles a sizable gap in height and reach here. Fielding is an awkward size matchup. If Alvarez can get inside, he’ll take those edges away. Will there be a struggle in that regard?

The Case for Fielding: The Smith loss might be misleading for Fielding. He’s a competent professional who got caught early against an excellent talent but that can happen. Fielding has a good jab, fights tall when he’s outside, and digs well to the body when he isn’t. In Fielding’s win against Zeuge, he put his punches together well and showed some tricky angles. His uppercut is sneaky and he tends to bring his hook up and under as well. If he can keep Alvarez at the end of his jab and back him up, Fielding can create chances. His game has to be letting his hands go consistently. Win a few rounds and who knows what shape the fight can take. Long shots have to start somewhere once the bell rings.

The Pick: As was the case a week ago heading into Lomachenko-Pedraza, it’s difficult to see a way for the favorite to lose. This week, it’s difficult to imagine a very competitive scenario. Alvarez will have to make some big fights on DAZN for their investment to truly pay off. This is just a start. Alvarez is too experienced and too talented but Fielding may hang around for a bit and try and that will be enough to entertain en route to an Alvarez win.