Cancio: Rene Alvarado or Joseph Diaz - I Don't Care Who is Next!

The event took place at Fantasy Springs Resort Casino in Indio, Calif. and was streamed live exclusively on DAZN.

After much toe-to-toe action, Cancio landed a body shot that ended matters at 1:01 of the third round. 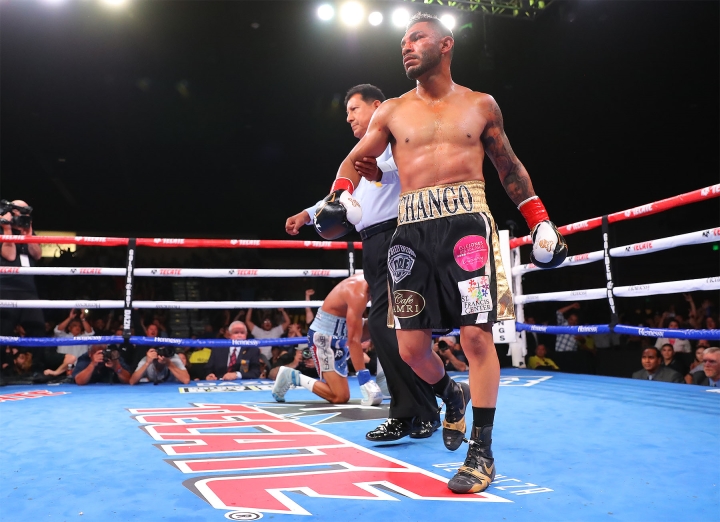 "I was going for the head and the body was there and I took it. I'm here to stay. It's not a fluke, and I'm ready for the other champions. After the knockdown, I thought he was getting up, but he knew if he got up I was coming for him."

"Like I said, I'm here to stay. It's not a fluke. I did this twice, and you got to see the new and approved Andrew Cancio. Rene Alvarado has been sitting there waiting patiently as the number one mandatory, and he's has proven himself and he's number one. He's has been waiting long enough, so let me get my cuts healed up and talk to my team and promoter.. I told them I don't care who it is, Rene Alvarado or JoJo Diaz."

Machado had no excuses.

"Look he's a great champion and he showed that tonight," said Machado. "I had an excellent training camp and he did his job. I have to check with my team and see if I should move up because this division is small for me. Look I was ready to get up, but the referee decided to stop the fight. I wanted to keep going.It was always my decision to have this fight be my last fight in this division. It was the risk I was willing to take in this rematch. Cancio did his thing tonight, and now I have to make a decision."

[QUOTE=ceylon mooney;19850233]u sure? WBA dont always mandate that regular belthder fights super beltholder, or at least they often take forever to do it.[/QUOTE] Well I'm hoping for as, much if he faces, another top ranked contender like the guys he's…

Credit to Cancio for both Ws against Machado. He has improved his style a bit since he last saw Diaz but Diaz is still the all around better fighter in every aspect & dont see a 2nd fight between them…

[QUOTE=BoloShot;19849647]If it's a final eliminator to face Tank Davis too that'd be a complete package for a good sequence of high profile and high payday fights.[/QUOTE] u sure? WBA dont always mandate that regular belthder fights super beltholder, or at…

If it's a final eliminator to face Tank Davis too that'd be a complete package for a good sequence of high profile and high payday fights.