Cancio: No Excuses, I Had a Great Camp But The Better Guy Won

Andrew Cancio never asked for a pity party in having to work a full time job even while serving as a junior lightweight titlist. True to his blue-collar lifestyle, the working class hero from Blythe, California didn’t feel the need to search for an alibi for when that run came to a disastrous close.

The clock finally struck midnight on Cancio’s Cinderella story, as he was manhandled by Nicaragua’s Rene Alvarado in their title fight rematch Saturday evening at Fantasy Springs Casino in Indio, California. The same venue which saw Cancio pounce Alvarado (32-8, 21KOs) in eight rounds nearly four years ago and also host his first major title win also saw that reign come to a close as he was stopped after seven rounds in Saturday’s DAZN-streamed main event.

“No excuses,” Cancio (21-5-2, 16KOs) was quick to insist to DAZN’s Claudia Trejos after suffering his first loss in more than three years. “I don’t know what it was. I had a great camp. I just couldn’t get going tonight.” 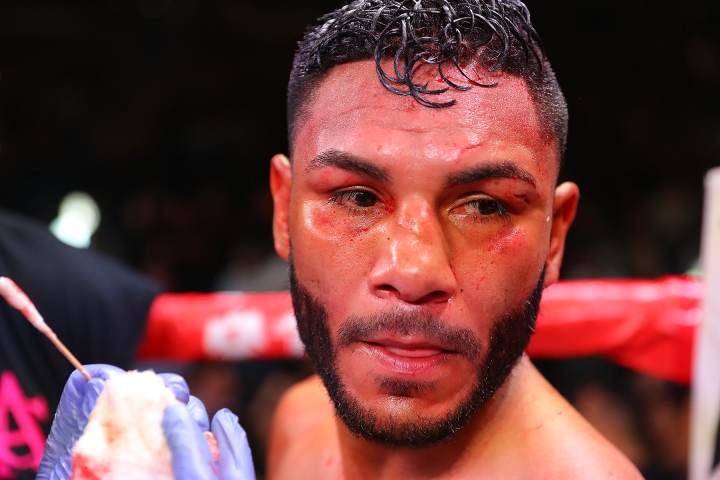 Alvarardo forced a furious pace to which Cancio just couldn’t contend, with the exiting champ also having to deal with a cut over his left eye which in part hindered his performance.

For the most part, it was Alvarado’s relentless pressure which paved the way to joining his twin brother Felix—a reigning junior flyweight titlist—on the title stage. The win made the Alvarado’s the first-ever set of twins from Nicaragua to both claim major titles, and just the fourth set of twins anywhere in the world to accomplish the feat.

The night also fell on the 45th anniversary of the late, great Alexis Arguello becoming Nicaragua’s first ever world champion, knocking out Ruben Olivares in the 13th round of their featherweight title fight between eventual Hall of Famers on Nov. 23, 1974.

In short, everything about the night pointed to destiny for Alvarado—and ultimately disaster for Cancio, whose pair of knockout wins over Alberto Machado in February and June would serve as the extent of his nine-month title reign.

“I kept trying, but tonight was his night,” insisted Cancio, who snaps a four-fight win streak since returning to the ring last April. “No excuses, I had a great camp but the better guy won tonight.”

It's a shame, I like Cancio and was rooting for him. He looked very flat and a completely different fighter than the one that blasted Machado out of there twice. Maybe he couldn't handle the success of those victories and…

He looked exhausted and out of shape to me. It’s a classy thing to say “no excuses “ but I wonder if personal issues contributed to him looking so bad.

He’s covering for his coaches and himself. His body and the way his body performed did not show him having a good camp. Cancio might be an alcoholic and his family and friends and coach contribute. I think It might…

Sucks man, I really wanted Cancio to win. He's had a great run since knocking out Machado the first time. He's also got a great story. If you haven't heard it already, go check out his interview on Teddy Atlas'…