LAS VEGAS – Devin Haney apparently will get his title shot sooner than he thought.

Promoter Eddie Hearn announced during a press conference Thursday at MGM Grand that he has a tentative plan for the fast-rising lightweight contender to face Luke Campbell on July 27 for the vacant WBC lightweight championship. Hearn hasn’t secured a venue for Campbell-Haney because the WBC is not expected to rule until next week whether to sanction it as a title fight.

That decision appears to be a mere formality because England’s Campbell (20-2, 16 KOs) is the WBC’s No. 1-ranked lightweight and Las Vegas’ Haney (21-0, 13 KOs) is rated third. The No. 2 contender, Zaur Abdullaev, is unavailable, according to Hearn. 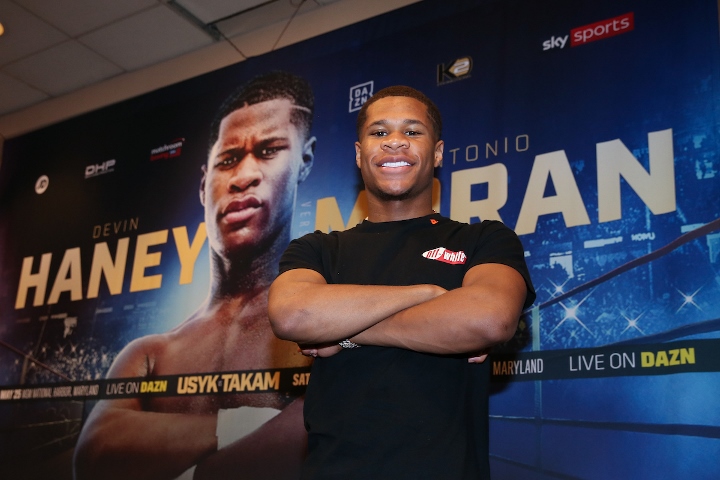 Russia’s Abdullaev observes Ramadan, the Muslim month for fasting, and thus wouldn’t be able to train for an appropriate amount of time for a fight July 27. Ramadan begins Monday and will last through June 4.

Hearn added Thursday that a Campbell-Haney bout likely would take place at a venue on the East Coast of the United States. Campbell, a 31-year-old southpaw who won a gold medal at the 2012 Summer Olympics, has boxed primarily in the United Kingdom, but he is more than willing to battle Haney in the U.S.

The 20-year-old Haney is tentatively scheduled meet Mexico’s Antonio Moran (24-3, 17 KOs) on May 25 at MGM National Harbor in Oxon Hill, Maryland. If the WBC determines he can move forward with the Campbell clash, the Moran match will be canceled and Haney’s DAZN debut will be postponed two months.

Haney signed a multi-fight agreement last month to have his fights streamed by deep-pocketed DAZN.

If the WBC sanctions Campbell-Haney, they’ll fight for the 135-pound championship Mikey Garcia gave up last month. Garcia (39-1, 30 KOs), of Moreno Valley, California, had held that title since January 2017, yet he fought at the lightweight limit just once after winning that championship.

Following a lopsided loss to IBF welterweight champ Errol Spence Jr. on March 16 in Arlington, Texas, Garcia decided to move back down to the junior welterweight limit of 140 pounds.

After Haney fights his can, at least no one is gonna tell him to get a belt, to avoid him. Or, maybe the excuse will be, he's too green, he needs to grow up more.

You know what would be a great fight after this one? Linares vs the winner of this. I know what you're thinking. Linares just got KO'd in 1. Well that's because the man is fragile and he was up against…

This is a damn good fight. I didn't think Haney would be moved this fast. Props

[QUOTE=Ray*;19709838]If the WBC sanctioned this fight for their belt without talking to Abdulaevi then I hope Hearn never complain on Whyte’s behalf in regards to his shot at Wilder.[/QUOTE] Hearn will presumably slip him some money to fight the winner…