Campbell: Not Impressed By Haney, Gamboa is Near 40 & Blown-Up 126-Pounder

He was scheduled to face unbeaten Ryan Garcia on December 5th in Indio, California - with the vacant interim-WBC lightweight title at stake.

The fight was postponed, due to Campbell coming down with COVID, to a date to be determined shortly. 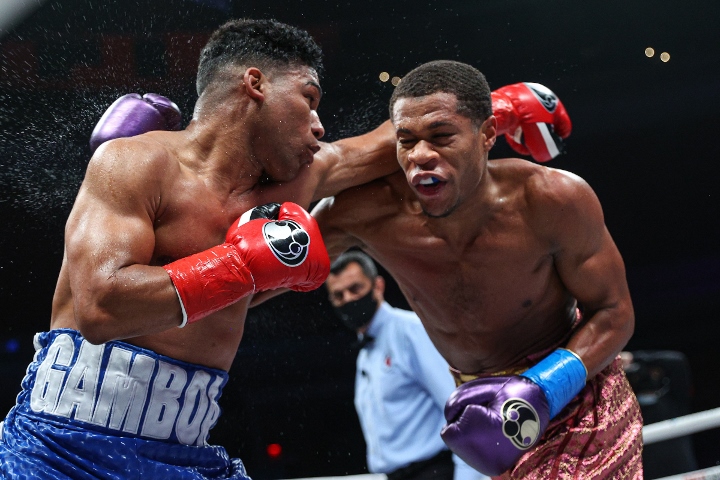 The winner of Campbell vs. Garcia is going to be in line for a mandatory crack at WBC world champion Devin Haney.

Haney was in action earlier this month, when he picked up a lopsided twelve round unanimous decision win over veteran Yuriorkis Gamboa, who is a former world champion and an Olympic gold medal winner.

Haney was a huge favorite to win the fight, and many believed he would stop Gamboa inside the distance. Haney himself had predicted a knockout ending - as he wanted to eclipse Gervonta Davis' knockout of Gamboa in December 2019.

Campbell was obviously an interested observer in the bout and he was far from impressed by Haney's performance in the ring. He was also shocked that Gamboa, known for having a vulnerable chin, was able to last the full distance on his feet.

"I wasn't too impressed with him, to be honest with you. He fought a guy who is not far off 40-years-old, who took the fight for money, and you could see that," Campbell told Sky Sports.

"He was really trying to get him out of there and he went the twelve rounds. His boxing ability is good, don't get me wrong, but he should be stopping guys like that if you're as good as what everybody is saying.

"Gamboa has always been known for not having the best chin and really he's a featherweight. He's a blown-up featherweight. I'm not going to sit here and slate him off, but I will say I wasn't that impressed."

Don't let this distract you from the fact that Luke is a gold medalist that lost to a UK dude nobody reveres. & is the betting underdog against a dude who has never had a title fight & that same…

Not impressed with Campbell Soup’s response. This tomato 🍅 can needs to shut up now. He’s turning into the European Gary Russell Jr lol

[QUOTE=Jab jab boom;20891736]many would've said the same about Hopkins when you compare the manner of his victories compared to Trinidad. The "boring" boxing style many labeled it as didn't seem to be anything special. But, more often than not, he…

Luke Campbell would be proud to have Yorkis Gamboa on his pitiful resume. This clown is just mad that he never could capture the WBC lightweight championship in all his underserved attempts. No way does Luke Campbell dominate Gamboa like…