Campbell: If I Hit Loma Clean, I Can Hurt Him and Get Him Out

Lightweight contender Luke Campbell will aim to use his physical gifts and boxing ability to inflict damage on Vasiliy Lomachenko.

They will collide on August 31 at the O2 Arena in London, where the WBC, WBA, WBO world titles will be on the line.

Lomachenko, a two division Olympic gold medal winner and a three division champion, is a very big favorite to win the fight. 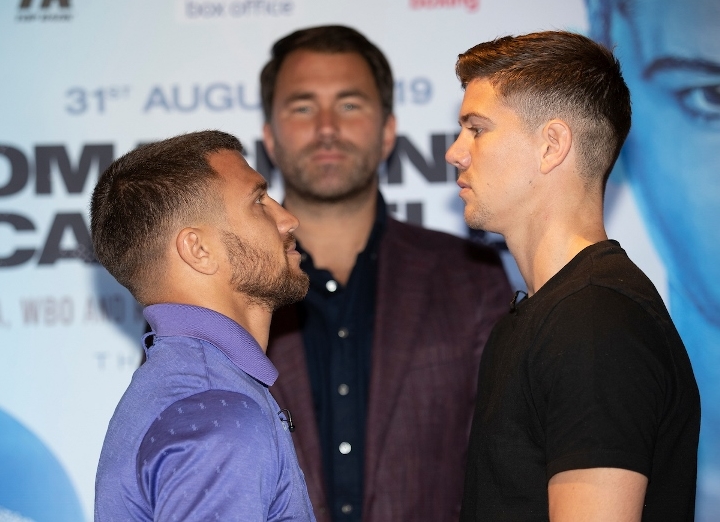 Campbell's trainer, Shane McGuigan, explains that his boxer will not apply a strategy similar to Orlando Salido, who handed Lomachenko the sole defeat of his pro career.

He says his boxer will need to win as many rounds as possible, win them big, and use a lot of power to rattle Lomachenko.

"[Campbell] is not going to do what Salido did - march him down and use his weight and size because Luke doesn't have that weight and size," his trainer McGuigan said to Sky Sports.

"Luke is not a come-forward pressure fighter. We have to take it out of the judges' hands. When we win rounds we have to win them with a big margin. We have to dent him with power, and Luke definitely has the power to dent him. Jorge Linares put [Lomachenko] on his backside. Although it was a flash knock-down, he still stunned him. [Lomachenko] has been hurt once or twice. Salido hurt him throughout the fight and a few people caused him [problems].

"This guy isn't unbeatable and if there's one person, boxing-wise, with the ability to match him it is Luke Campbell the Olympic gold medallist. We've got as many assets as anyone [Lomachenko] has faced. How do you negate his speed, ability and technical prowess? We have the size advantage, the power advantage. No, we're not as quick or agile but we can take that away with range and timing. I am fully confident we have the ability to beat him and even knock him out."

Campbell feels very confident that he's got the power to not only hurt Lomachenko, but put him away inside the distance.

"You can't [prepare for his style] but we have quality in-house sparring with Josh Taylor, a world champion and a quality operator in the weight above," Campbell said.

"If I hit him clean, I believe I can certainly hurt him and get him out."

Campbell is a good fighter, he is technically solid, strong and has a clear height and reach advantage over Loma. We saw Loma had some difficulty with Pedraza and I would say Campbell is more solid than Pedraza. However despite…

Loma will get the victory here.

[QUOTE=StargazerV;20000180]Manny can, he definitely has everything to do it, except for power. Tank doesn't - his KO ratio has nothing to do with skills, because he didn't show it against any good opposition. The same with anything else he looks…

[QUOTE=StargazerV;20000920]Linares is way better than Tank and Teo. Smarter, has more experience, proven to be able to adjust in the ring. Maybe he got shot after Loma, but I'm not talking about the today's version of him. I'd like to…

Campbell looks all kinds of bigger in that photo. I sincerely hope Lomachenko does not move up in weight anymore. I know it has been repeated to death, but this is his max division and he gives up a few…