Cameron Not Waiting on Katie Taylor, Aims To Land McCaskill

Katie Taylor is not a subject off limits to Chantelle Cameron, but it is one she has spent a long-time discussing. One thing Cameron is determined not to do, however, is let Taylor upset her own career plans.

Having spent the past few months as mandatory to Taylor’s WBC lightweight title, the decision to step up to super-lightweight this weekend to face Anahi Ester Sanchez could be seen as Cameron chasing after the Irishwoman, who moved up in weight to claim the WBO belt.

But Cameron insists this is about spreading her options as this is final eliminator for the WBC title at the higher weight.

“It is not about fighting Katie Taylor, it is about whatever mandatory chance I get,” Cameron said. “I’m mandatory for Taylor at lightweight, but this is at super-lightweight, so I am trying to get mandatory for Jessica McCaskill.

“I am not waiting around for Katie Taylor. That’s why I have moved up in weight for this final eliminator, because I want to face any world champion.  I feel good at both weights. I carry a bit more power at super-lightweight. I’ll fight whoever I get the chance against, but I think it will be McCaskill." 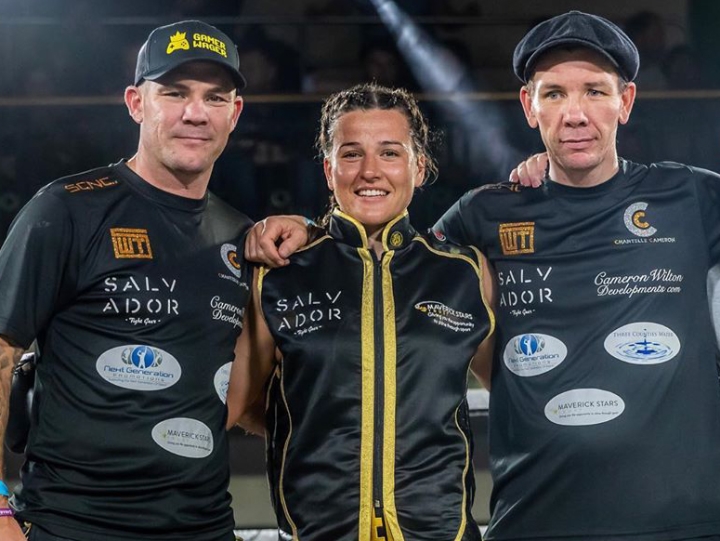 Sanchez has boxed – and lost to – both Taylor and McCaskill. The Argentinian is best known to British audiences for being in the other corner when Taylor first became a world champion at the Principality Stadium, Cardiff, but represents the toughest test of Cameron’s career to date.

“She’s a tough girl, I’ve done my research on her,” Cameron said. “I’m not worried about what Katie did against her, I’m a different boxer to Katie, so I am going to focus on what I have to do.

“When that bell goes, we will see what she has got and what I have got. She’s got a good boxing brain, but I am getting better and getting more experience in the pro boxing game. It is going to be a good fight.”

This marks Cameron’s fourth fight since she switched trainers to Jamie Moore and she has trained for this fight alongside Martin Murray, Rocky Fielding and Carl Frampton, whom she used to train alongside when they were both trained by Shane McGuigan.

“I’ve upped my game again. It’s been a great camp, no niggles, feeling strong, sharp, positive,” she said. “I love working with Jamie and Nigel (Travis). I’m being well looked after.”

At 28, the time could be right for Cameron to come to the forefront of British boxing after the retirement this week of Nicola Adams, the double Olympic champion. Cameron knows Adams well, having not only trained alongside her as part of the Great Britain squad but lived in the same house as her.

“We were all in the same house, me, Nicola and Savannah (Marshall), so I spent a lot of time with her,” Cameron said.

“She did great things for British boxing in Britain and she opened the door to the younger generation.

“But I think she has made the right decision. She’s 37, she doesn’t need to box anymore. She’s made her money, she’s had her career, she won two Olympic gold medals, she can go and enjoy her life now.”

I like this kid but she at the moment is not " box office " enough for Taylor , by the time she is Taylor will have had her last 3 fights , got Beaten and cashed out , all…