Joe Gallagher, head trainer for WBA super middleweight world champion Callum Smith, wants his fighter to have a major fight with a big name opponent, at Anfield, in 2020.

This Saturday night, Smith will make a mandatory defense against John Ryder in Liverpool.

Should he overcome Ryder, the next would be a targeting of names in several weight classes. 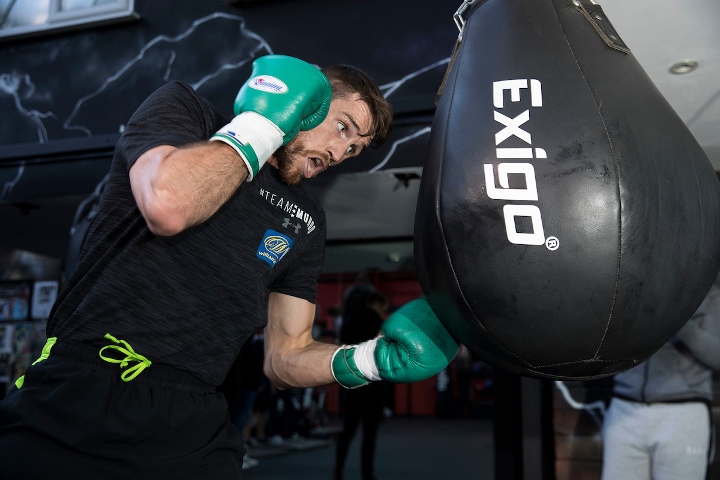 For the right fight, Gallagher says there is no problem with Smith heading up to the light heavyweight division - including a showdown with WBC, IBF unified champion Artur Beterbiev.

There is also Canelo Alvarez, who has the WBA "regular title" at super middleweight and the WBO light heavyweight title. And Smith is open to facing IBF middleweight champion Gennady Golovkin, who would have to move up in weight.

"I think he would do, if it was the right fight, the right title and it made sense, 100 percent," Gallagher said to Sky Sports. "His frame is big enough to carry the weight up and I think if Callum moves up in weight tomorrow, a lot of people would recognise him as the no 1 light-heavyweight in the world. I think he'd get a world title shot no problem as well.

"Well obviously you've got Canelo now, who has just beat Kovalev, but any of them. Beterbiev is a good fight as well.

"There isn't many people out there, big names out there that can draw that to Anfield to fight Callum Smith. Maybe GGG, there's another one. We'll just have to wait and see."

Benavidez maybe the best in the world , I would pick him to beat them all except maybe Beterbiev . Artur is as good as all the hype he has been getting. If Canelos' people let him fight Beterbiev within…

[QUOTE=JayCho;20201223]Does his side of the pond mean the UK? Because he last fight was in NYC, the groves fight was in Saudi, the fight before that against the kickboxer was in Germany(I think). Or do you just mean he doesn’t…

All of those fights are terrific. I would add Bivol and Benavidez to the list. As long as Callum quits wasting his time after winning WBSS

The excuse that most top boxers are not we’ll known in the USA and that’s why Clenelo will not fight them is as good as ducking them!