Callum Smith got the momentum going back in his career again with a scintillating showing.

The former British and European champion had been out since last September’s win over George Groves.

Smith travelled to Jeddah, Saudi Arabia to face ‘The Saint’ in the final of the World Boxing Super Series, stopping him inside seven rounds. 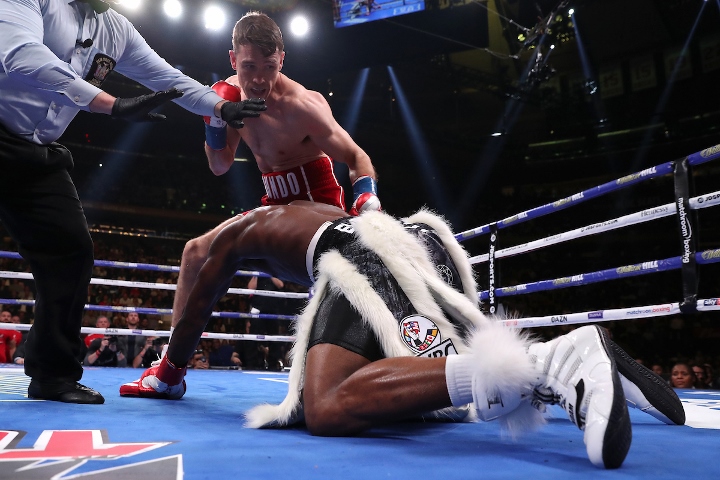 After the birth of his daughter Alba, the youngest of the four fighting Scouse siblings returned against ex-sparring partner Hassan N’Dam at Madison Square Garden in New York.

And the 29-year-old retained his WBA Super, WBC Diamond and Ring Magazine belts, exclusively live on Sky Sports Box Office in the UK and DAZN Stateside.

The fight started with a left hook in the opener and there were droppings of the challenger in every session before the referee had seen enough and called a halt to the contest after the third knockdown, which was caused by a right hand, at two minutes and 56 seconds of the round.

N’Dam, who was going into the fight on the back of last December’s win over Martin Murray, was placed on the back foot by Smith from the very start.

He failed, as part of the supporting cast to Anthony Joshua’s successful defence of his WBA Super, WBO, IBF and IBO world heavyweight titles against Andy Ruiz, to put a dent in the premier man in the division and was ultimately outclassed.

Now, ‘Mundo’ will be targeting the big names, including the likes of Saul ‘Canelo’ Alvarez who stopped former Smith opponent Rocky Fielding at the same venue back in December.

“It felt good in there. It’s good to be back in there and tonight was all about the performance even though I had a few nerves going in,” said Smith, who is scheduled to be back in the ring in September. “I want to stay active, I want to keep winning and I want to prove that I’m the best super-middleweight in the world which I believe I am.

“This is a special night for me in my career and the plan now is to prove that I’m the best in the world by testing myself. I think you’ll start seeing the best of me when I fight better fighters. I’ve managed to achieve a lot having a pretty easy career.

“I’ve not had a gut-check just yet and to be honest, I don’t really want one, but there’s plenty for me to get at and that’s the plan.”

Eddie Hearn, Smith’s promoter, says he now wants to make him a major star in the division by making the biggest fights.

“I think the super-fight is ‘Canelo’,” he said. “Joe [Gallagher, Smith’s trainer and manager] tells me that fight has to happen at Anfield [Liverpool Football Club’s stadium], but it could take place at Wembley [Stadium, in London].

“It was a great performance from him and now we want him to be nice and active now. He’ll be back in September from now and I would like to box him three times this year.

“Of course, he’s going to want the big fights, the mega-fights, but that was a nice fight for him to come back to, to announce yourself to the big stage on American television.

“But they’ve made it clear that ‘Canelo’ is the fight that they want and we’ll have to see what happens in September.”

I just want to hear another sickening "CRUNCH" when he KOs someone again. His right hand is dynamite! That was the stuff of beauty – something to show any non-boxing fan.

[QUOTE=nick_viking;19799833]Would prefer to see Smith take on some of the other champs at super middle before going for Canelo - what about Eubank, Benavidez, Ramirez or even Saunders? If he beats a couple of them then he has a right…

[QUOTE=GlassJoey;19800043]This is a problem of all fighters of all countries But Smith is almost the opposite to what you describe. Until he beat Groves, most U.K. fans thought he was behind Degale, Eubank and Groves. Even his brothers would never…

[QUOTE=jdp28tx;19799760]This is the problem with English fighters. They win one title (title is usually won against mediocre competition) and their ego shoots through the roof. They start talking about superfights neglecting the fact that one needs to be a superstar…

I actually don't have much desire to see a Canelo fight. Smith has other names to fight and guys his size. BUT, if Canelo were to fight him, it has to make you wonder how someone like Canelo can jump…