Callum Smith on Canelo: You Want a Fight People Will Tune In For - You Have To Pay!

Callum Smith tells BoxingScene.com that he hasn’t heard whether or not he will be Saul “Canelo” Alvarez’s next opponent, but he is expecting it won’t be him and has stopped even reading about it.

Back before the lockdown, it was Smith or Billy Joe Saunders to get the Cinco de Mayo fight with the popular Mexican in Las Vegas. Canelo went for Saunders, the WBO super middleweight champion.

But with Saunders out of the reckoning for an autumn fight, which could take place behind closed doors, Smith could miss out again to another British rival – John Ryder, the man Smith beat via a disputed decision in the last defence of his WBA title last November.

“The first time round it was dead exciting,” said Smith of being talked up as Canelo’s opponent. “I would read every article and I would get my hopes up. I was in negotiations through Eddie (Hearn) with Golden Boy and you do think ‘I could get this and if I do, it’s huge’.

“Now, until the fight is done, I won’t give it much thought.

“I have been here before and didn’t get the fight, I’m not going to be getting too excited about it. It is a fight I would love, but I’m not too sure there is that much chance of me getting it.” 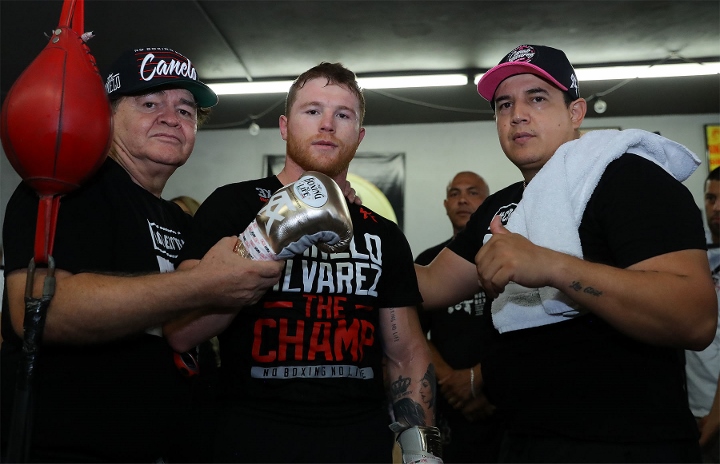 Smith is well aware that the lack of a live audience that makes matters problematic. While Canelo’s contract with DAZN guarantees him a huge purse, no ticket sales leaves a hole in the finances for promoters Golden Boy. DAZN are keen on a big fight to regain many of the subscribers lost by the coronavirus lockdown, but theirs is not the only opinion that matters.

“I spoke to Eddie last week. He said my name was in the mix. I think DAZN would probably like it, because it is a good fight for them to get subscribers, but Golden Boy would prefer a cheaper option because they have no revenue on the gate.

“People want to see good fights if they are going to subscribe. You have to put on fights people are willing to pay for. They might have to bite the bullet.

“We will have to see. In the end it is down to Golden Boy, DAZN and Canelo himself, I am sure he has a big say.”

If Ryder does get the call, Smith would not be resentful of it, however.

“I understand the circumstances,” Smith said. “Billy Joe had the fight, as far as I know, and the whole reason that isn’t happening is because they agreed a price and now they have come round and said that because they haven’t got the crowd, they can’t afford to pay him that.

“So they want to take a cheaper options, but the world champions aren’t going to take the money they want to pay.

“No disrespect, but to someone like John Ryder, who hasn’t earned huge money in his career, what they are willing to offer is life changing for him. Whereas for some of the other champions who have had good paydays, it isn’t.

“If Ryder does get it, I see the logic, because his name is well thought-of since the fight with me. If Canelo goes in and does a brilliant job on Ryder, they will say he handled him a lot easier than I did. It would be a smart move for him and he’s probably not in a position to demand huge money.”

If Canelo isn’t an option, Saunders could be, although it would be difficult to imagine an all-British world title unification fight taking place in front of no paying spectators.

“I have always said I want the best fight possible,” Smith said. “If me or Billy Joe don’t get the Canelo fight, that fight makes more sense than any other, a British unification fight. It would be a huge fight for both of us.

“The Daniel Jacobs fight was mentioned before the lockdown after his win over Chavez. There are a lot of options out there for me, but we have to see what happens with the coronavirus regarding getting crowds back and travel.

“If the Canelo fight doesn’t happen, and I don’t think it does, we will just have to sit down with Eddie, go through the options and go with what is best for me.”

It is only in the past two weeks that Smith has returned to the gym, although he says he did not pile on the pounds during the lockdown.

“I don’t put too much weight on. I do lose a bit of muscle and put some fat on around the hips, but I have never seen 14 stone (196 pounds) on the scales,” he said. “I’m usually mid-13st and that is after a long layoff.

“My nutritionist does check in from time to time. I eat quite healthy from day to day, it’s just the snacks that are the worry. The fridge is a bit more healthy now and I’m back in the gym, so I’ll be ready when I get the call.”

[QUOTE=sicko;20664000]So he does need quality Dance partners to do numbers, compared to Mayweather and Pacquiao who could fight anybody and people would show up and tune in. Canelo haven't had an opponent with any type of personality to help sell…

[QUOTE=Outwest Exp 355;20662546]How the hell did Canelo lose the May 5th date then? He’s the biggest star in boxing and he can’t land an opponent? GTFOH.[/QUOTE] Jacobs got 12 Million, Kovalev got 12 Million, Fielding got like 4 Million, GGG…

[QUOTE=ShoulderRoll;20664111]Let's be honest,[B] not a single one of those names will be willing to take a paycut to fight Canelo during this pandemic. [/B] Several of them are already on record saying they won't.[/QUOTE] They SHOULDN'T! DAZN signed Canelo to…