Plant (19-0, 11KOs) attempts the second defense of the 168-pound title he claimed in a 12-round win over Jose Uzcategui last January in Los Angeles. The bout headlined the most watched boxing to ever air on FS1, leading to the Tennessee native topping a PBC on Fox telecast in his adopted hometown of Las Vegas. Plant blasted out unbeaten but overmatched Mike Lee in the 3rd round of their primetime headliner, which served as a lead-in to Manny Pacquiao’s 12-round over unbeaten Keith Thurman in their Fox Sports Pay-Per-View main event.

Feigenbutz makes his stateside debut with Saturday’s fight, while aiming for a major title (WBC/WBA/IBF/WBO) in his second try. The 24-year old from Karlsruhe, Germany has won 10 in a row heading into Saturday’s title fight, all but one ending inside the distance.

Tyler Tomlin was forced to go the distance for the second straight time, though it only met more time in the ring for his adoring fans to admire.

The unbeaten rookie junior welterweight from the same Ashland City town as the evening’s headliner powered his way to a four-round unanimous decision over Mexico’s Jose Zaragoza. Scores were 39-37 twice and 40-36 in favor of Tomlin (5-0, 3KOs), whose presence prompted literally thousands of fans to arrive well before the cameras began rolling.

Tomlin was in control throughout the contest, though denied a knockdown in round two when Zaragoza (2-2-1, 0KOs) was floored by what the referee officially ruled was the result of a headbutt. It didn’t discourage the 20-year old from remaining focused on the task at hand, though having to settle for a second consecutive decision win, coming just four weeks after his previous bout at the Nashville State Fairgrounds Arena which he has sold out in each of his three ring appearances including his pro debut last May.

Leon Lawson III proved to be a tall order for Francisco Javier Castro. The 6'5" junior middleweight from Flint, Michigan scored two quick knockdowns en route to a 1st round stoppage in their scheduled eight rounder.

Lawson (13-0, 6KOs) landed a three-punch combination right out the gate, the sequence punctuated by a left hook which put Castro (28-13, 23KOs) on the canvas mere seconds into the contest. Lawson—who is trained by Kevin Cunningham—went right back on the attack, flooring the Chihuahua, Mexico native once again, this time forcing the stoppage at 0:36 of round one.

Jose Miguel Borrego (17-2, 15KOs) gave himself an early birthday present in the form of a 3rd round knockout of Brazil’s Joaquim Carneiro (26-13, 23KOs) in the afternoon’s curtain raiser.  The battle of welterweight southpaws saw Borrego control the action early, a boxing match quickly breaking out into a showcase for the Augascalientes, Mexico native.

Borrego picked up the pace in round three, which proved too much for Carneiro to handle. A flurry in the corner left Corneiro defenseless, prompting a stoppage at 1:14 of round three. Borrego has now won three straight, the latest coming three days prior to his 22nd birthday. 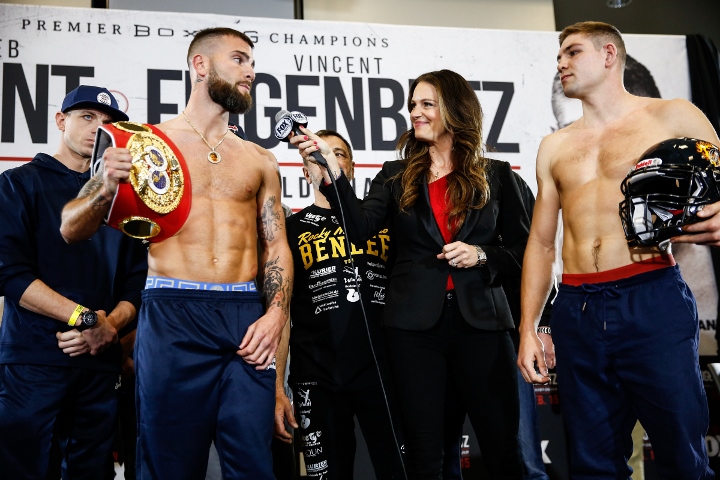