Sometimes the story does matter.

It doesn’t, or shouldn’t, matter in the realm of judging the rounds of a fight. The two men with gloves on their fists and what they do with them are all that matters three minutes at a time.

Where the stories matter is in how the audience invests in a fight. Caleb Plant’s was a story well told in the lead to his defeat of Jose Uzcategui on Sunday night. The tragic loss of his daughter made it hard to root against the Nashville native. The epilogue of the fight, revealing Plant successfully proposed to the lady in his life, wrapped a bow around the event.

The PBC might have a moneymaker on their hands. Kudos to them for all the work they did along the way. We don’t have rating information yet but it’s hard to imagine all the NFL advertising for the fight didn’t help. Curious eyes got a damn good scrap to go with a fine story. Caleb Plant has every chance to be a star.

To his credit, Jose Uzcategui did nothing to make himself unwelcome in the future. His late rally and refusal to go quietly after two early knockdowns make him a good TV fighter. He just wasn’t a better fighter on Sunday night. 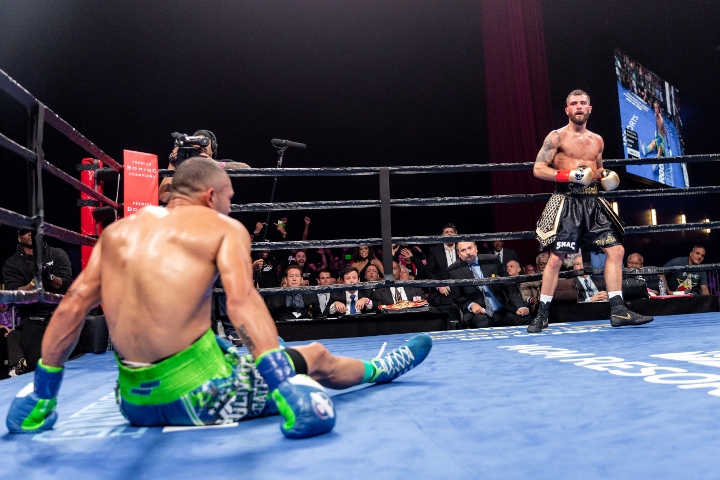 The Future for Plant: There were plenty of question marks about Plant before his big win. He had shown he had some moves but one still had to wonder would happen when he stepped to the next level of competition. The answer was box beautifully early, combining stellar defensive skills, offensive sharpness, and personality, and then grit his teeth through the hardest last third of a fight he’s faced so far. Plant’s performance in the rounds where he struggled may have spoken more positively about his future than the early going.

While Plant has gone the distance often recently, it wasn’t against the sort of heat Uzcategui was trying to bring late. Plant used his legs a little less, laid inside, and found just enough counters, clinches, and slips to prevent Uzcategui from ever getting on track. Whether he’s a fighter who will fade late in other fights now that he has this experience remains to be seen. It would be no surprise if he gets better having been through it now. The immediate future for Plant is unclear. He won as a mandatory so he probably has the breathing room to pursue a hometown defense before bigger fights emerge. If there is a logical unification, it could come against whoever wins the battle for the vacant WBC belt between Anthony Dirrell and Avni Yildirim. At 26, time is one his side and the more appearances he has like this one, the bigger he can get.

The Future for Uzcategui: When a fighter is dropped twice in the first four rounds, and can barely find the target in front of them, it’s not uncommon to see them fade in frustration. Uzcategui didn’t do that.

Ultimately, he didn’t have enough power or consistency of attack to put Plant on the brink but he made what was a rout early into a dramatic chase scene. He lost a belt but he didn’t lose much in terms of return value. Uzcategui can hope for a rematch, a shot at the Dirrell-Yildirim winner, or be matched with anyone else in the division and still be worth tuning in to see. If he can rebound with some wins, he remains in the thick of the super middleweight division.

These guys had a really touching exchange in the dressing room. You'll find it on fighnews. Uzi gave some kind words to plant and told him to take care of his family through use of the belt.

How did Yildirim get to a WBC title fight? I think the WBC Diamond champ is no.1 at the mo. Nobody has ever dismantled George Groves like that

Good for plant, I knew he would win on points. He gassed late so hopefully he doesn’t overtrain and hopefully the experience helps. Good to see the USA get another champion....what is that 18 now?

Uzcategui's coach said that the key to winning this fight was that his fighter had to be patient. He wasn't...he was rushing in without jabbing, because he was overconfident. Thus ...the loss of the belt.

got a chance to see the performance yesterday, was impressed with Plant