Buboy: If Pacquiao Wants To Run Thurman Over - I'll Let Him Do It!

Buboy Fernandez, head trainer of eight division world champion Manny Pacquiao, says his boxer is ready to do a lot of damage on July 20th.

The Filipino superstar holds the WBA "regular" version of the welterweight crown. 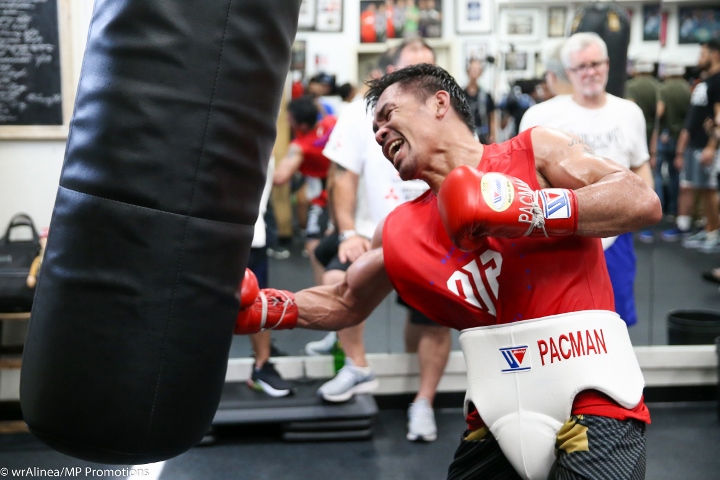 Buboy is getting Pacquiao ready with co-trainer, Hall of Famer coach Freddie Roach, at the Wildcard Boxing Club in Hollywood, California.

Buboy took over as chief trainer for Pacquiao with last year's dominating win over Lucas Matthysse.

In the weeks leading up to the fight, Thurman has been talking a lot of trash and promising to end the career of the 40-year-old veteran.

He believes Pacquiao has little left in the tank - and advised the boxer to focus on playing basketball.

Some of Thurman's statements have angered Pacquiao.

“Manny rarely badmouths an opponent, but he refers to Thurman as a braggart and arrogant," Buboy told Rappler.

According to Buboy, he hasn't seen Pacquiao this angry since 2006, when the boxer blew away Erik Morales in their trilogy fight. In that bout, Morales was dropped three times before the fight was waved off in the third round.

If Pacquiao wants to come out and do damage on Thurman from the start, Buboy will let him go.

“The last time I saw him act this way was in (Erik) Morales 3,” said Buboy. "If he wants to run him over, then I’ll let him do it. We’ll do everything, but with caution."

Pacquiao was in the ring back in January, and won a dominating twelve round unanimous decision over former four division champion Adrien Broner at the MGM Grand. It was Pacquiao's first bout in the United States in over two years.

[QUOTE=Roadblock;19882519]Last two were Jnr WWs , this a full WW and with no CW for a Manny weight that will impact the fight, with no CW in sight and a guy 3 inches bigger and 6-8 pounds heavier, it matters.[/QUOTE]…

It is funny how these Pac haters suddenly goes quiet when you recall that Mayweather did get Ariza as conditioning coach. LOL Crabssss

That’s probably his best shot at winning honestly, Thurman is most comfortable at mid-long range so up close is Pacquiao’s better off rushing him down. That said, I don’t think he has the legs or engine for it anymore.

[QUOTE=Bundt;19881820]I would love to see the old Pac-Man running over someone.[/QUOTE] ... yes... precisely... [QUOTE=RGJTMMRDCMJRJSM;19882070]The most stupidest thing Buboy did in the Broner fight was not let Manny go. Pacman specifically said he wants to go after Broner and end…