Broner: Me & Pacquiao Did VADA Testing 'After I Made Some Noise'

“It was VADA testing,” Broner told a small group of reporters Tuesday after making his “grand arrival” at MGM Grand.

When reminded he mentioned during a press conference November 19 in New York that the United States Anti-Doping Agency would administer the performance-enhancing drug testing, Broner replied, “It’s VADA testing, yeah. I’ve been tested, yeah. After I made some noise, but yeah.” 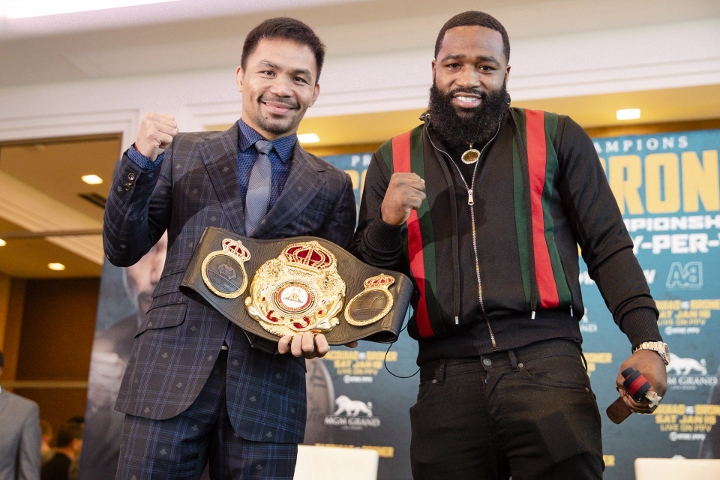 Pacquiao, 40, knocked out Argentina’s Lucas Matthysse on July 15 in Kuala Lumpur, Malaysia. That marked the first knockout for Pacquiao since he stopped Puerto Rico’ Miguel Cotto in the 12th round of their WBO welterweight title fight in November 2009.

Broner didn’t disparage Pacquiao’s impressive victory in his last fight against Matthysse. The former four-division champion wasn’t interested, either, in discussing the differences between the VADA and USADA testing programs.

VADA tests on behalf of the WBC for its “Clean Boxing Program.” USADA is the official testing agency for the Olympics, including the U.S. Olympic Boxing program.

Cincinnati’s Broner also knows he is satisfied with the PED testing administered leading up to his showdown with Pacquiao on Saturday night at MGM Grand Garden Arena in Las Vegas.

Broner didn’t want to elaborate on what he meant by saying he “made some noise” regarding drug testing for his shot at Pacquiao, the WBA world welterweight champion.

“Everybody seen it,” Broner said. “It went viral.”

Broner referred to a video he released late in December, in which Broner contended neither he nor Pacquiao had been tested for PEDs to that point.

[QUOTE=.WesternChamp.;19437931]his speed, explosiveness is still there as seen in training. what im more worried about is his reflex. this will get to him first before losing his speed, etc.[/QUOTE] Training is one thing. Nigel Benn is in his 50's and…

[QUOTE=whirlout;19436636]Something is wrong with xylocaine if you use close to a fight or even on fight night.[/QUOTE] Sorry but I'm still waiting for you to explain how this doesn't apply to Pacquiao. Let me remind you lidocaine is another name…

[QUOTE=EasternEuroFan;19437890]I agree and not even for PED reasons. Pacquiao is 2 years older than he was when he lost to Horn. He already looked old in that fight, even if some thought he won, it was a struggle. A good…

[QUOTE=whirlout;19437861]Answer the questions dumb fu.ck. Why 3 weeks ? NSAC unaware?USADA unaware? why administered at his house and why we still dont know what the fluid is? Typing an essay doesnt make you smart by the way. U ll be…

[QUOTE=EasternEuroFan;19437890]I agree and not even for PED reasons. Pacquiao is 2 years older than he was when he lost to Horn. He already looked old in that fight, even if some thought he won, it was a struggle. A good…