Broner: Glad Roach Is Back, So We Can Get This Thing Shakin'

Broner often tells jokes during press conferences, some of which fall flat. While promoting his upcoming pay-per-view fight against Manny Pacquiao, however, the crass Cincinnati native tastelessly made fun of famed trainer Freddie Roach, who suffers from Parkinson’s disease.

Broner made the uncouth comment during a question-and-answer session with Showtime’s Jim Gray toward the end of a press conference at the Waldorf Astoria hotel in Beverly Hills, California. 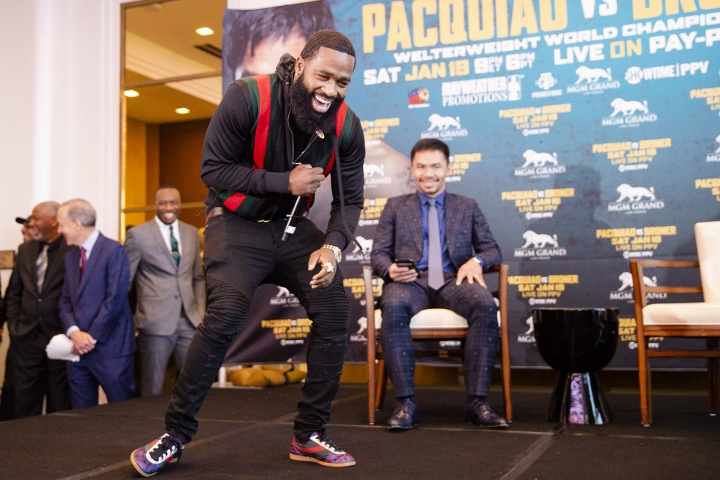 Gray asked Pacquiao about bringing back Roach to help train him for the Broner bout, as detailed in the exchange below.

Gray: You’re bringing back Freddie Roach as a trainer, in your corner. What was the decision?

Pacquiao [to Broner]: You scared?

Pacquiao [to Gray]: Freddie is always – [I] include him to my team. So we never lost Freddie. He just, he need to relax sometimes. And now we need Freddie.

Broner: I happy he bringin’ Freddie back.

Broner: Sh*t, so we can get this thing shakin’.

Broner’s obvious, offensive reference to the involuntary tremors Roach endures due to Parkinson’s disease was met mostly with jeers from reporters and others in attendance Tuesday.

The 29-year-old Broner, in a failed attempt to play off what his comment meant, responded to the backlash by asking, “What?”

Pacquiao revealed before a press conference Monday in Manhattan that Roach will rejoin his training team as he prepares to box Broner. Buboy Fernandez, Pacquiao’s childhood friend and a longtime assistant to Roach, served as the Filipino superstar’s head trainer for his last fight, a seventh-round knockout of Lucas Matthysse on July 15 in Kuala Lumpur, Malaysia.

Roach expressed disappointment that Pacquiao didn’t personally inform him that he wouldn’t work with the future Hall-of-Famer for the Matthysse match. The 58-year-old Roach maintained all along, though, that he would welcome a reunion, despite that they hadn’t spoken since the immediate aftermath of Pacquiao’s controversial loss to Jeff Horn in July 2017.

The 39-year-old Pacquiao said Monday that Roach will supervise his training camp once he moves it from the Philippines to Roach’s Wild Card Boxing Club in Hollywood, California, just before Christmas. Fernandez, Pacquiao said, will remain his head trainer.

The one and only 8 DIVISION CHAMP and FIGHTER OF THE DECADE will punish AB.

[QUOTE=The Big Dunn;19288002]IMO he has been told to lose. He'd lose anyway but his job is to make Manny look like he has a chance to beat Floyd in a rematch so they can maximize sales.[/QUOTE] lol. pac already beat…

[QUOTE=Robbie Barrett;19287990]I agree. This was a cherry pick fight for Pacquiao. Most money for risk.[/QUOTE] much better than crawford opponent. lmao.

This is totally offensive and I can't condone him saying some **** like that, but. . . . [IMG]https://media.giphy.com/media/l41Ym8xiZx9R8DGRq/giphy.gif[/IMG]